Another month begins and, according to various media outlets, summer is now over in Ireland. How I wish it were so! We went out today and by the time we got back, Bill was doing even more grumbling about being hot than me! Lucky that no one needed to interact with either of us in any meaningful way, because we were both a bit grumpy by the time we got home. It's cooler inside and there's no sun, so that's good.

The Hooked! Seafood Festival is going on today, so we walked to the other end of town and took a look. We watched the filleting demo that was going on and I was remembering my sad attempts 20+ years ago in Alaska. It was our first full summer there and we found out that a big truck was going to show up at a spot in a neighbouring town to give away fish. I guess they'd had the eggs stripped at a processing facility in the southern part of the state and they didn't want anything else, so they trucked the fish up. We queued up with a cooler and got lots of fish that I attempted to fillet. They were pretty ragged looking fillets. My technique can use much improvement.

There was this sad reminder of what we, as a species, are doing to the planet. 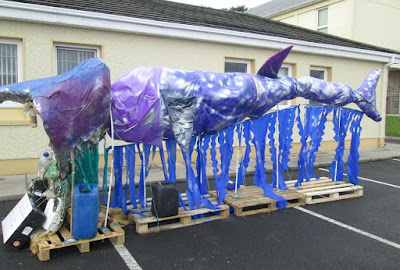 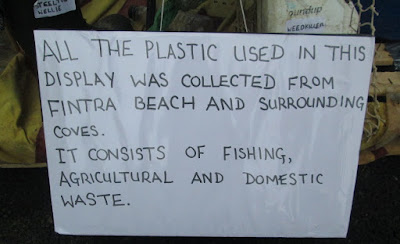 We went into a tent where various products were displayed and where someone was cooking something seaweedy, but it was hot, steamy, and crowded, so we didn't stick around.

The festival takes place at the tourism college, which is a satellite campus of Letterkenny Institute of Technology. There was a chowder contest or something inside, but again, there were too many people in a not-big-enough space, so we didn't hang around. That is my one quibble with the event--the lack of space made it difficult to move around and to see what was going on. Had they had things more spread out, it would have been much better. Still, it was interesting and seems to be popular. Maybe no one else cared about the heat and the lack of space!

Now we're home and I have a new novel to start--one that came in this week after being on my hold list for months. I'm looking forward to it. Here are a few more of the books I read last month (when it was still summer!).
Big Magic: Creative Living Beyond Fear by Elizabeth Gilbert
I saw something about this book in one of the book related emails I get and something in the post struck a chord. I no longer remember what that was, but at the time, I recalled seeing the book in the e-book section of the library website, so I clicked over and borrowed it. It was a good book with a few useful reminders about how creativity works in practice and the importance of working through the difficulties that come with being someone who lives on the cultural and societal fringe.

It Can’t Happen Here by Sinclair Lewis
I’d downloaded this book a few years ago and never got around to reading it. Just as well, I suppose, because I had a completely different experience with it than I would’ve had I read it when I first got it. The many ways in which it felt like a novel set in today’s USA would not have been quite so blatant then. The story is about a fascist candidate, named Buzz Windrip, who is elected president. Of course, during the campaign many people did not take his candidacy seriously, stating over and over that such a thing could not happen there. They learned otherwise. Lewis did a good job of describing how such things do happen--rallies complete with violent thugs, racism, misogyny, a candidate that speaks in a way that gets the crowd whipped into a frenzy, but with no idea what he actually said, and unrealistic promises are all utilized to good effect. One thing I really liked about the book was that the plot was not just a look at what leads up to the election, but also discussed what happened afterwards. I have always been fascinated by what happens after major culture changes--how people cope, how they resist, how they move on to build something new. I thought in the case of this book, it got a little bit bogged down in the middle, but once the focus turned to the post-election changes, it got more interesting for me.


In spite of the fact that it's a bit too warm, signs of autumn can be seen. I'm always on the lookout! 😉 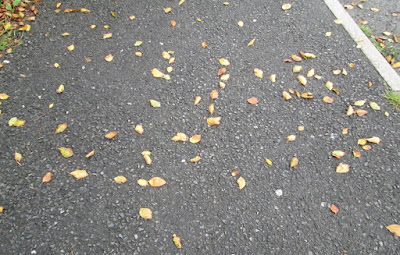 I hope this first day of September is a great one in your neck of the woods!
Share
Posted by Shari Burke at 1.9.18