We went to Donegal Town this morning to go to the library. The Diamond has been sporting the bunting for weeks now and the Abbey Hotel has gone all out with the flags. 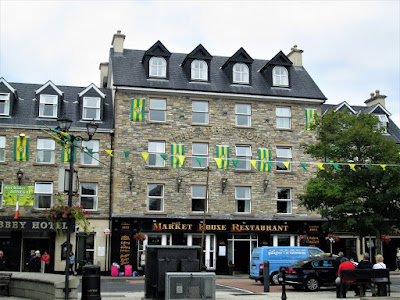 I think this all went up because of some sporting events, but not sure whether they are still going on or whether they've just left it up for tourist season. Ether way, it's kind of festive.

I knew I had one book in at the library and four others in transit. I hoped to get those today, but honestly thought that since yesterday was a bank holiday, I probably wouldn't. I was wrong--they were all there. Woo-hoo! 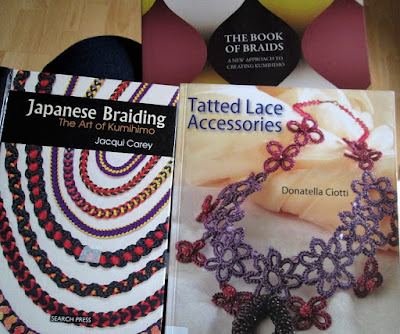 I was particularly chuffed about these three, all of which appear to be brand new. I know the tatting one is new to the library because I periodically do a keyword search and last week was the first time I saw that on the list. I was surprised , but delighted, when I found the kumihimo ones in the system. I've watched lots of videos, but I learn best from books, so am looking forward to settling in with my kumihimo disk, some thread or yarn, and the books. I also got a novel I've been looking forward to reading and an Irish language for beginners book and CD.

After we were done at the library, we walked around a little bit and then called in at Aldi before it was time to get the bus home. We'd read that the Animals in Need group really needed cat food donations because they are rescuing lots of cats this year, so we picked up a couple of bags while we were in Aldi and dropped them off at the nearby charity shop that they run. While there, we also picked up a couple of books. I took a cosy mystery that takes place at Christmastime in the Cotswolds. Another time we were in there, I found a book in the same series that takes place at Halloween. I've set them aside and will read them when it's the appropriate season and then they can go in the wee free library.

The gladioli are still spectacular and seem to be enjoying life in our living room, even if they are not arranged, but just plunked into a jug. 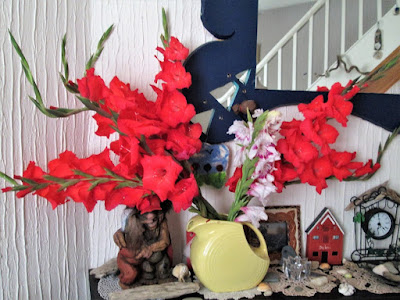 After supper, I went outside and cut off spent flowers from the front garden and got to enjoy more floral beauty. It's been a nice day here. I hope it's the same in your neck of the woods!
Share
Posted by Shari Burke at 7.8.18

That looks like, “no jug” . . . might be McCoy . . . quite a collectible in the states!
The glads look hearty and happy!