Is This the Best Way?

It's the last day of a bank holiday weekend here. The next one will be the weekend before Halloween. There have been a lot of cars, camper vans, and vehicles with canoes on the roof going down the road. So one might think it would be a good time to set up a charity drive. I am not sure whether setting up what was essentially a roadblock charity collection was the way to go, but I leave that to more experienced people to decide.

Down the hill at the bottom of the lane that comes up to where we live, the road widens a bit to accommodate cars dropping off and picking up the kids at the vocational school. Last week, there were sandwich boards out saying there would be a road collection for Donegal Hospice on Saturday. That's a good organization worth donating to and we've often seen people in the middle of the road wearing high viz vests and holding out buckets to passing motorists, collecting for various causes. This time, they took it a step further by parking a fire truck in the drop-off zone and placing cones in the lane to block it off. There was a pick-up truck from the fire department parked in the middle of the road and one guy for traffic going one way and another for traffic going the other way. If you wanted to get in or out of town on the main road, you had to stop in the tailback that was created. 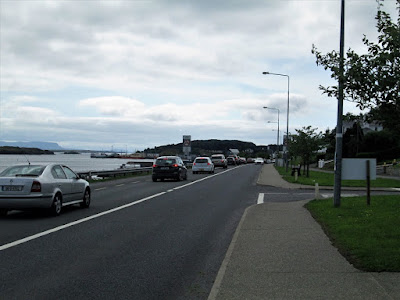 We were out in the afternoon and traffic was backed up about a quarter of a mile. Some vehicles turned around. Some people rolled up their windows before they got to the guy with the bucket and looked straight ahead. Some rolled down their windows and threw something into the buckets. It's not that I think donating to a hospice is a bad idea, but I wonder whether this is the best way to get people to do it. I suspect that some people donated because they felt they had to and others, who might have donated in other circumstances, did not, simply because they didn't like it being in their face to that degree. When we've seen this in the past, it was usually (but not always) at an intersection or a light where traffic would be stopped anyway. We have no traffic lights and the intersections are further through town where there is not as much traffic, so I understand why they set up where and when they did. I hope they had a good collection. They sure annoyed a lot of people in the process, though.
Share
Posted by Shari Burke at 6.8.18

Yeah, that's a very interesting way to collect donations. I'm not too sure that would fly around our parts. I'm like you, I do donate to certain things but I don't like being put in a position to where I feel obligated to.
Have a wonderful week!!
Saimi

I do not like this way of asking for donations. I give much to others and wish to do it in my own way. Also another popular way is almost every merchant is now asking to round it up or add a certain a certain amount to purchase. I used to do this but not anymore!!