Creeper No More and Books

One of the things I loved about this place was the creeper that grew up the side of the building, especially when it turned red, which it was just starting to do. It framed the windows, which was nice, although it was starting to become too much downstairs around the kitchen window, where it wanted to grow right inside. Apparently, it was causing problems up near the roof as well and allowing water and possibly a critter into the building. Since structural damage had become likely had the situation continued, the creeper is being pulled down and is now in piles out front. It's kind of a bummer, but I see why it needed to be done. Our kitchen seems almost too bright now that the leaves are gone from the window, even though it's a grey, rainy day. 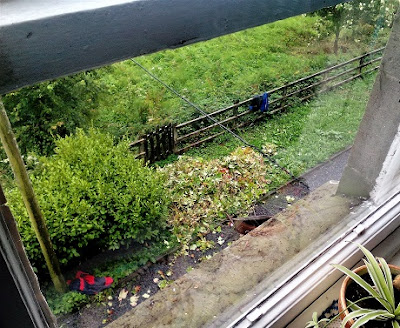 Continuing on from my last two posts, here is more of my book list from July:

Everything I Never Told You by Celeste Ng
This book was recommended in one of the book related emails I get. I clicked over to the library website and put it on hold. A couple of days after I picked it up, I sat down, opened it, and was hooked. I kept reading until I was done, finishing it after midnight in bed. ‘Lydia is dead. But they don’t know this yet. 1977, May 3, six thirty in the morning, no one knows anything but this innocuous fact: Lydia is late for breakfast.’ That is how the book opens. From there the narrative moves forward and backward in time as the reader learns about how things unfolded within the family up to that point and slowly discovers what happened to Lydia Lee. The Lee Family consists of Marilyn and James Lee, the parents, who both bring different scars to the relationship with each other and eventually, their children. Marilyn wanted to be a doctor and was always the lone woman in her science courses, where she was patronized and undermined. James is an American of Chinese descent, which makes him an outsider who always wanted to fit in. Their children are the only ‘Orientals’ as they’re called by the white people in the book, in their schools. Nathan is the oldest child, Lydia in the middle, and Hannah is the youngest. Both Marilyn and James project their own needs onto Lydia. Nathan and Hannah are pretty much ignored. Hannah becomes a careful observer. Nathan looks forward to getting out. Lydia has no one to rely on except Nathan. I could relate to so many of the issues that drove the family. Even though the details and backgrounds were different for me, many of the larger dynamics were the same.  Beyond all that, it’s just a really good story written by a talented writer. I am looking forward to reading her latest book, Little Fires Everywhere--getting closer to the front of the queue!

The Little Book of Craftivism by Sarah Corbett
What is craftivism? How does one go about it? What are the benefits? What’s the point? The author, who is the founder of The Craftivist Collective, provides the answers, along with a couple of projects, in this fun little book.

The Great Alone by Kristin Hannah
Let me start by saying that I loved this book. At times, it took my breath away. I was not sure I would like it, but I decided to request it because of the Alaskan setting. I’d never read anything by this author before, but the book was part of a list of recommendations that were in an email I got. The way it was described made it sound like it might be a bit too ‘fluffy’ or romance-like for my tastes, and I suppose there was an element of that, but not enough to detract from the book in any way. The author has spent lots of time in Alaska since she was a kid and it shows in the beautiful way she describes the landscapes, the seasons, the light in summer and the winter dark, how it feels to be there, and the characters who inhabit the bush village where a good part of the story takes place. At one point, she says that for people who are not born in Alaska, but end up there, they’re either running to something or away from something. That seems about right, based on my experiences living there for almost a decade. The story is told from the point of view of Leni, who is 13 when the book opens. Her mom, Cora, had her when she was 17 and the two are very close. Leni was young when her dad, Ernt, went to Vietnam, where he was captured and spent time as a POW. He was a different man when he returned. Now he might be treated for PTSD, but this was 1974 and such things weren’t talked about then. he had a rough time, unable to keep down a job, unable to sleep well because of nightmares, becoming more unhinged in winter and when it was dark, and generally not coping. Cora tries to sooth the troubled waters, but is not very successful at this. One day, Ernt learns that his war buddy, who did not make it home, left him his homestead in the Alaskan bush and off they go, in a VW van. They are not prepared, of course, for what will be required to survive there. The community rallies around to help and teach. They arrive in the summer so things look like they could be heading in the right direction for this little family. But then winter arrives, with the extreme, life-threatening cold and the darkness and things change. I won’t say anything else because it would spoil the story, which is a page-turner. It really was a case of me becoming lost in the book. I would stop reading and look up, just kind of blinking, and need to take a few minutes to get my bearings. As I was reading, I felt like I was right there with these people. I’m glad I decided to request it in spite of my initial misgivings!

Wherever you are today, I hope it's a pleasant and peaceful day.