We walked through town today to drop off the bottles and tins for recycling. On our way, we passed the tourist information centre, which had pretty flower boxes on the railing outside. I stopped to look at the flowers when a bee flew right into this one. 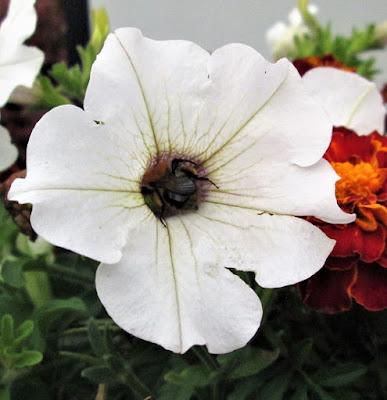 I was already standing there with my camera out, because I was taking a picture of this incredible purple beauty when the bee flew up, so I hardly had to move. 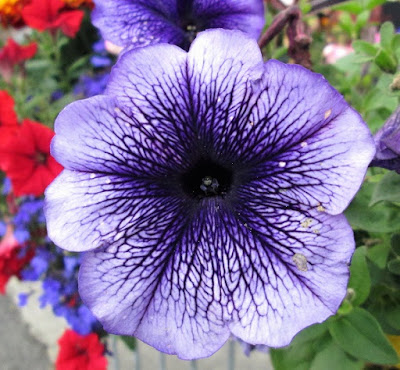 Later, our landlord stopped in to give me a bunch of hydrangeas before he left to go back to Dublin. What a nice thing to do! He'd been here for a few days doing a bit of work around the place. He has a big garden out front and did some work on that while he was here, too. He'd cut the flowers from there. I told him I love hydrangeas. He said there's an apple tree in his garden and he's cleared it out a bit so it's easier to get around down there--things were a bit overgrown. He said they're good apples and should be ready in a couple of weeks, so we should go help ourselves. We will do that!

And I have some gladioli in here from a friend's garden, too. 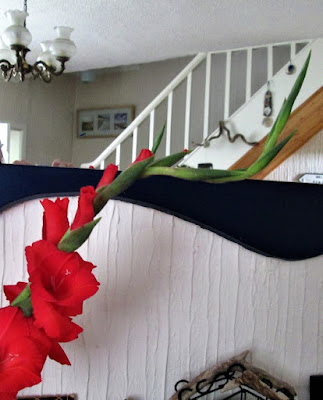 I realized I never did finish posting the July book list, so here's the end of that:
The Cow Book: A Story of Life on an Irish Family Farm by John Connell
This book was written by young man who comes back to Ireland from Australia to help his dad on the farm. They have cows and sheep. He mixes his own personal history and observations/feelings about farm life, village life, various relationships between family members and other villagers with sections about the history of cows and the cow/human relationship, cross-cultural views on cows, Irish folklore and history, and occasionally comparisons with other animals.

Ancient Irish Legends by Padraic O’Farrell
A collection of stories from Irish folklore that the author likes and has put into his own words. I came across this in the e-book section of the library website. Many of the stories revolve around cows and since I read this directly after The Cow Book, I found myself reading more in-depth stories that were briefly described in that book.

Death and the Seaside by Alison Moore (e-audiobook)
I downloaded this e-audiobook from that section of the library website. I wasn’t sure about it at first, but soon I was gripped by it, wondering how the story would unfold. The narrative is from different points of view. Bonnie is about to celebrate her 30th birthday and her parents make her move out of their house. She is trying to write short stories and has a couple of cleaning jobs that don’t pay much, but with her parents’ help, she takes a ground floor flat in a house that’s been renovated into flats. eventually, she meets her landlady, Sylvia Slythe, who comments that she knew Bonnie’s mum, and even Bonnie herself when she was quite young. Sylvia is weirdly interested in Bonnie’s writing--both the autobiographical short story she is working on as well as the thesis she was working on before she abandoned her degree program. Why is she so obsessed with Bonnie and her work? Why is Bonnie in the situation she’s in and why does she have such strange dreams? Why does she always need to be on the ground floor? What is this thing about jumping? And what role does literature play in all of this anyway? The Guardian, in a review of the book, says this:
‘Death and the Seaside is a challenging book. Dense, complex, thought-provoking, it manages to be at once a fairytale and a philosophical treatise, high-octane thriller and literary interrogation. Like the dreams that haunt Bonnie’s night-times, it holds its secrets close, and repays careful rereading.’

I hope you are surrounded by niceness and beauty today, too!
Share
Posted by Shari Burke at 4.8.18

I wasn't sure about it at first, partly because of the reader, I think, but after a while I was hooked. The ending was a little abrupt.