Swing Set and Other Stuff

A couple of doors down from us, on the corner where the road and the lane meet, is a creche. They have a small play area in back, but it's not big enough for any playground equipment. Across the lane on the opposite corner is the Moville Men's Shed. They have a grassy area out back. I'm not sure whether it's for the creche or not, but they've been working on creating a playground. I really like the way they made the swing set and see saw out of logs and used wee pallets and stumps for table and chairs. 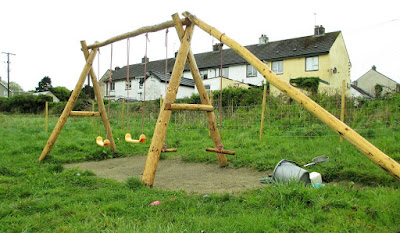 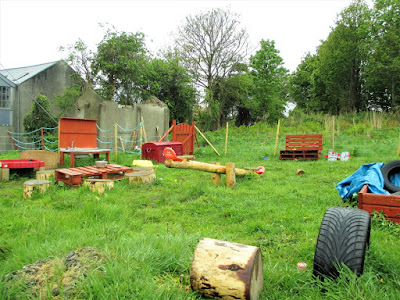 I'm sure the kinds that use it will enjoy it.

I'd not heard of men's sheds until we got to Ireland and the woman at the B&B told us about them. Men--especially older men--were having trouble connecting, apparently, so someone came up with the idea to create these places where they could form a group and work on projects. The projects depend on what is needed in the communities. Some build boats. In Killybegs, they made the planters in town, I think, and made some wooden Christmas trees that were art of a tree festival first and then went on to decorate a playground in town, among other things. In Twin Towns, they are very involved with the community garden. They often have art and other classes available to members of the men's shed as well as the wider community. It seems like a really great idea and has been wildly successful around the country.

We had a nice reprieve from the warmth and sun today with drizzle and rain instead. When we went out to the library, the wind slammed into us and it was actually a tad chilly. My smile was enormous 😀

I hope it's a beautiful day in your neck of the woods, too.
Share
Posted by Shari Burke at 11.5.18

LOVE it, Shari! What a delightful peek at your part of the world. I love the idea of men's sheds and suppose it is like our Senior Centers here where people go to hang out -not sure what the men do but the women piece quilts and make layette sets for the women at the hospital who are having babies and can't afford to buy things.

It is rainy here today, too, and very chilly. I am so anxious for some nice warm weather-nothing is budding/blooming here yet. Have a great weekend-xo Diana