I was playing with scraps again last night. I've been taking small lengths of leftovers, too small for anything else (even a one-round hexagon), and making Romanian cord. I just make them as long as I came with the yarn that I have, so they're all different lengths. I had some in a bag and have been getting ideas about various ways to use these cords. I finished off a couple this morning and am well pleased. 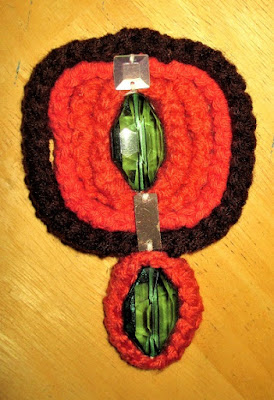 The beads in this one were strung on a piece of cord as a bracelet. Bill picked it up for me in a charity shop a while back. I think I'll use this as an autumn decoration--since the beads are translucent, it'll look nice in a window. When I was playing with it last night, I had the small circle on top and the bottom reminded me of a pumpkin. I considered taking the smaller circle off, but this morning I thought of the beads and decided to try those.

This is where I left things last night. 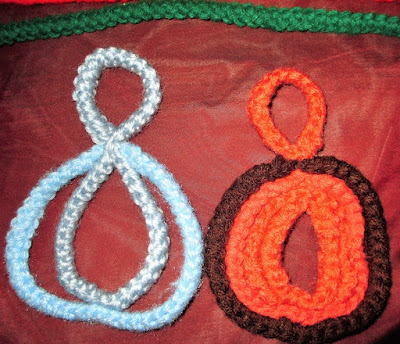 For the blue one, I added a pendant that used to be an earring. It's sterling silver with turquoise inlay and it was tarnished from sitting in the embellishment container for a long time, but I dabbed some toothpaste on it and brushed with an old toothbrush and that took care of it. 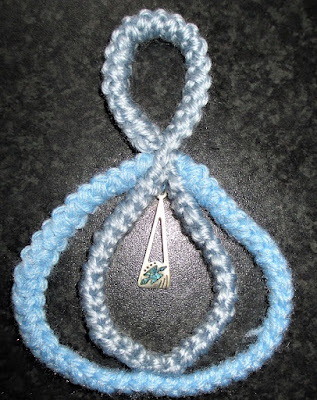 I'm not sure whether I will add anything to this one--I really like it the way it is. But if an idea pops into my head, I might do something else with it.

I am quite taken with this Romanian cord stuff. The structure of it lends itself well to having other kinds of stitching attached to it--it is often used as a base for needle laces of various kinds. But it also has some substance and it can be manipulated and hold its shape while still being flexible. It would also work as a border around other forms of stitchery. I'll be playing around some more with these cords!
Share
Posted by Shari Burke at 7.5.18

Beautiful and a great use for left-over thread. The gems are gorgeous, also.
Thank you for your kind note re Kaboodle. I sure do miss her.
All the bet to you both this weekend.