Finishing Up Some Odds and Ends

Tomorrow is our last day in Moville, so we're tidying up the loose ends. Today someone from the letting agent's office stopped by to look around. Bill is off to recycle bottles and tins. I am creating meals from the odds and ends left in freezer, fridge, and cupboards. Everything but what we'll need up until the last minute is packed. Laundry is hanging to dry--it's quick in this heat. This afternoon, I managed to finish the book I was reading so it can go into a charity shop box and it's one less thing to carry. I also finished a pair of socks for Bill that I'd been working on off and on for months. 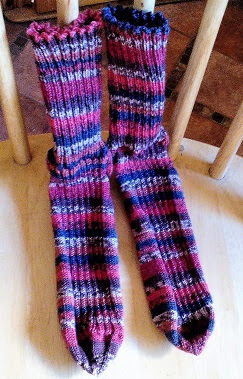 Nice autumn colours, which allowed me to daydream about cooler weather and far less sun. I'll be casting on for a pair for me later in the week, when I am reunited with my yarn. I am going to do a slouchy cuff, I think, but not sure yet about what sort of design, if any, I'll use for the instep.

I cast on 68 stitches with US size 1 needles and did a 2x2 rib until the cuff was as long as I wanted. I switched to US size 0 needles, starting at the heel flap and for the rest of the sock. On the gusset decreases, I stopped when I had 72 stitches. My preferred method for sock making is to use 3 double pointed needles with a 4th working needle, so in this case, I had 19 stitches on needles 1 and 3 and 34 stitches for the instep on needle two. I continued with the 2x2 rib for the instep until it was time for the toe decreases, when I knitted around to the end, doing the star toe.

Tonight I plan to crochet and listen to podcasts, then read the novel I have on the go--hopefully I can finish that, too, and leave it in Moville. I will be by a window, hoping for a breeze. I hope you have some relaxing and peaceful moments in your day, too--and a nice breeze. 😊