Back to the Future

I've not posted here in a while--things suddenly got a bit busy and we find ourselves in a transition phase once again. While we don't have an official date yet, we are hoping that we will be back in Killybegs by the end of next week and if not then, soon after. We've already started bringing stuff there. I've met some wonderful people in Moville and I can look around and know, in a rational, objective way, that it's a beautiful place. But it's not my place.

When we came here the first time to visit, we arrived midday on a Monday. I didn't make it through breakfast on Tuesday before becoming quite ill and going back to bed with symptoms I recognised, having experienced them in a few places in the US.  I had no idea this would become a regular thing once we moved here. I quickly learned, though, that spending much time outside would put me down for the rest of the day and often into the next one, so I stayed in more and more. But at the time, we were in the moldy apartment, so I was still sick a lot. We both hoped that moving house, as we did last year, would help. And it did--as long as I stayed inside. This house is great and I have not been sick as I was in that apartment. I'd started keeping track of what was wrong with me and when, and in the past year, when I have read that journal, I have been amazed at how often I was in pain, not able to function, be comfortable, or sleep longer than an hour and a half at a time. When I was able, I'd try to get done as much as I could in spite of feeling like crap. I've been grateful since to have a place where I can be comfortable and do things that I enjoy, like stitch and read, even though I still have some nerve damage. But I discovered that I still could not spend any length of time outside. So I kept on going out for a little while here and there to do errands like go to the library or the shop for food, but even there, Bill started doing a lot of it. The few times we went elsewhere--to Sligo or Ballybofey last fall, for example--I was fine and it was so nice to be outside walking around for hours at a time.

Bill started talking about leaving Moville, because of the health issues and a few other things. I resisted for a time after we moved into this house, because I am so tired of moving and really felt like I could not muster up the energy to do it again. Eventually, I changed my mind. Throughout my life, I've been fine with periods of hibernation, but this has gotten to be too much. I miss walking. I miss looking at trees and flowers and watching my little spot on the planet change with the seasons. I miss feeling like I am right where I need to be. I miss living with a sense of ease. I miss being healthy. I had no idea how much I would miss those things until they were gone. I cannot have them here, so I am going somewhere where I can get them back. I am grateful to be able to do this.

I can say that I have learned a lot in the couple of years we've been here. I've also been reminded how easy it is to take things for granted.

What are you grateful for today? 💜 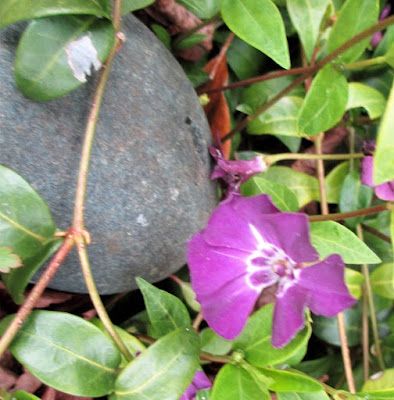