This has been the most wintry winter we've experienced in Ireland. We had quite an array of weather through yesterday and overnight--temperatures a few degrees above zero at most and a few under at night, howling wind, rain, sleet, hail, snow, thunder, and lightning. It was approximately 12:30 a.m. when the snow came crashing down from the front side of the roof and shortly afterwards that it came down in the back.

Yesterday was a good day for soup, so I made some cream of vegetable soup for supper, which we had with grilled cheese sandwiches. It was a simple soup--I sweated chopped onion, bell pepper, carrot, and garlic in some olive oil, added cubed potatoes and boiling water and let it cook until the veggies were done. I added some milk and black pepper and let it heat through, before using my stick blender to whiz it up. There was some left and today is another good day for soup, with rain sleet, and more snow expected any minute now, so I dumped the leftovers into a pot, added a can of sweetcorn and heated it through. After ladling it into bowls, I added scallion and a sliced red chilli pepper. I love soup. 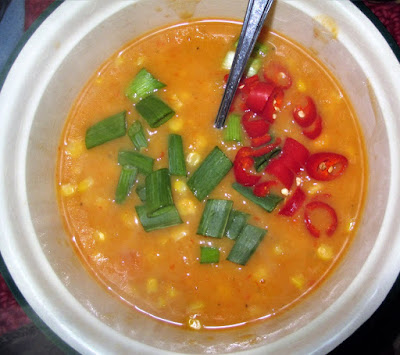 This morning, I put the ingredients for some oaty wholemeal banana nut yeast bread into the bread machine. We had some of that toasted and topped with homemade ricotta alongside the soup, and I think it'll make great cinnamon toast, too! When I make bread, I can never resist hacking off an end while it's still warm and eating it with butter. Today I had a nice hot cuppa with it. It was a good day for warm fresh bread, a couple of vats of hot tea, yarn, and reading! 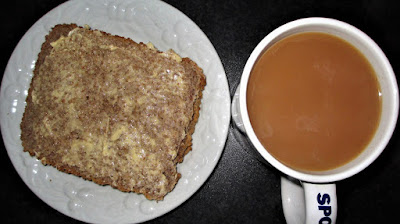 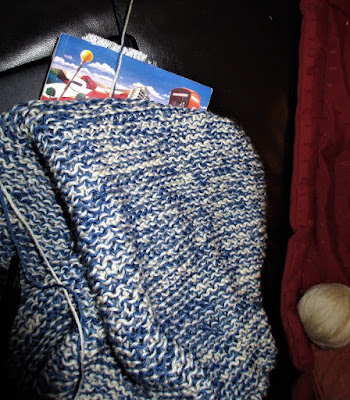 Met Eireann has issued an orange warning for us, so more snow, ice, sleet, hail could be on the way. Looks like we'll have a few more wintry winter days and then it'll go back to feeling like spring again. As long as I can comfortably wear my woolly bits, I'm happy enough!
Share
Posted by Shari Burke at 17.1.18

The soup looks especially delicious as we are having icy/snow days too. Like you, I love bread just out of the oven with butter. I am reading many library books during this weather when the roads are too dangerous to be out.