Last week as we were entering the local shop to pick up a few groceries, we noticed a Christmas cactus on the plant stand outside. We've enjoyed having such plants in the past and have had one in almost every place we've lived, so we considered buying this one. We hesitated, though, because we've had a few plants from that shop and while the hydrangea has seemed to thrive out back in its pot, the coleus we got was waterlogged when we got it and never did dry out. The poor thing rotted and we had to strip the leaves off until just a small bit remained. We cut that off and stuck it in water, where it has grown new roots. Another plant from there took a long time to dry out. We decided to wait on the Christmas cactus and decide another day if it was still there the next time we were at the shop.

Bill was there yesterday and immediately saw that the cactus was gone. As he walked by the plant stand, however, he spotted a couple of sections that had fallen off the plant just lying there. He picked them up, brought them home, and we stuck them in water to grow some roots. We have our fingers crossed. We grew a very nice Christmas cactus this way when we lived in Maine. He found segments on the ground at the library and brought them home. Into the water they went and soon the roots appeared. We planted it in dirt and it kept on growing. We enjoyed the flowers when they bloomed. I know nothing about plants, but I'm always game to stick pieces in water or dirt and wait to see what happens. We'll see what happens with these two wee bits! 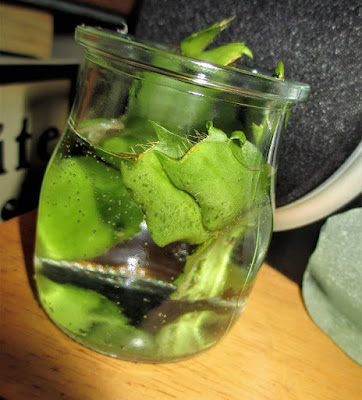 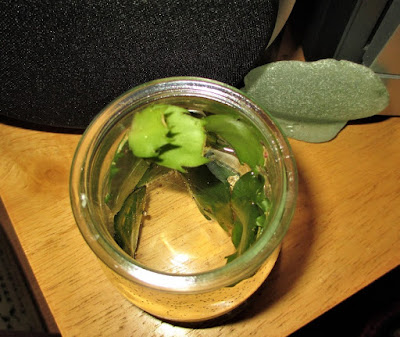 I hope it works! It will be very enjoyable.