Reading in December: Part One

Another year of reading commences! Yay! I look around me at the shelves and piles of books and smile at the happy hours that I will spend with them. I had many happy hours with books in December and here are some thoughts about a few of them.

Affluence without Abundance: The Disappearing World of the Bushmen by James Suzman
This book is based on 25 years of experience working with various San people in the Kalahari region of Africa. These people were called ‘the original affluent society’ by anthropologist Marshall Sahlins, who built on earlier work by Richard Lee. The point was that people who lived in an economic system he called ‘primitive affluence,’ were satisfied with what they had and were not constantly grasping for more, more, more. This idea was picked up and popularized by some in the counter culture movements of the 1960s and some questionable work came out of that. The author states that, ‘What was special about the Bushman data was that it showed that they coped easily with relative scarcity and that they had mastered the art of not obsessing about whether the grass was greener on the other side, which--given that they lived in one of the world’s oldest deserts--almost certainly was the case.’ (pg 16) It’s no accident that when Sahlins was introducing his ideas, he ‘characterized hunter-gatherers as the gurus of a “Zen road to affluence” because the idea of not clinging and grasping is very Buddhist and quite sensible, in my opinion.
The author talks about the lifeways of the San, trying to understand the way things used to be by asking about stories and folklore. He has been going back to the region for a quarter of a century and has seen many changes in that time. Life is very different for these people now that colonizers came in and introduced cattle and farming. Racism, exploitation, rape and other forms of violence have impacted the San greatly. The gathering of wild food is now not always possible. The book talks about how things were, how they’ve changed, and makes the point that the way the San used to live was the way all human species lived for most of our evolutionary history. As agriculture developed, human societies did too--and not always for the better. One thing that struck me was the fact that for many San today, tea with 7 or 8 tablespoons of sugar is a common beverage and it’s what provides most of their caloric energy. The story is the same all over--once indigenous people become forced to give up their traditional foods and eat what the colonizers bring, their health deteriorates significantly. Anyway, I was curious to read this book. There’s no new argument, really, for anyone who has studied anthropology--even if someone has just taken an introductory course, there’s a good possibility that they’d have been familiar with the basic affluent foragers discussion. But it’s an enjoyable read nonetheless, as we meet the people he worked with and peek into their lives. It’s also sobering and very useful now, as we watch the climate changing. This drive towards constant growth and rampant consumerism are destroying the planet we live on. Constantly grasping for more stuff is harming individual people, families, and the planet.

The Spirit of the Buddha by Martine Batchelor
I enjoy listening to the author’s dharma talks and have read a couple of her other books, so I looked her up in the library catalogue one day and came across this one. In it, the author is interested in exploring Buddhist ethics as understood from the earliest written records currently available. She does not focus on the religious stories that were added to the basic canon as these ideas spread to other cultures and through time, although she does devote the last two chapters to the ways in which the ideas spread and how they are still useful to people today, both in monastic communities and among lay people. She begins with a chapter placing the person know as Buddha in the context and culture of his time. The author and her husband, Stephen Batchelor work in the realm of secular Buddhism. I like that. It’s very practical. She will often say that it’s all well and good to have some great insight while sitting on your cushion at a meditation retreat, but the real test is when you go home and are interacting with family, friends, co-workers, and neighbours in real life. The basics of Buddhist ethics can help us do that. I find these ideas very helpful in my own everyday life and they have been a great comfort to me during some extremely difficult times. The Four Noble Truths tell us that every life involves suffering at times. Most of the suffering comes about because we cling to certain outcomes or grasp at things we think we want/need rather than accepting what is in any given moment. There is a way to lessen our suffering. That way is the Noble Eightfold Path--right view, right thought, right livelihood, right speech, right action, right effort, right concentration, and right mindfulness. Different people will translate these 8 in slightly different ways. I am not a Buddhist. I don’t have a regular meditation practice in the traditional sense, although there are things I do that serve the same purpose for me. But I do try to live with an ongoing and evolving understanding of these ideas. This is a good book for someone who is interested in an ethical system that does not have religious overtones or who is simply curious about the foundations of Buddhism.

The Well of Ice by Andrea Carter
This is the third book in a series of cosy mysteries set in Inishowen. Glendara is the fictional village where much of the action takes place. I always picture Carndonagh--in spite of the few things that don’t fit, most of the descriptions sound like Carn. The book came out in October and I put myself on the list. It arrived at our wee local library the other day. Good timing. It is Christmastime in Glendara, but the festive season is shattered when the pub burns to the ground one night and an employee’s body is found in a remote location on Christmas Day by none other than Benedicta 'Ben’ O’Keeffe, a local solicitor and main character. Secrets are revealed, relationships tested, and lives are altered.

I hope 2018 has started off well for you and that there are many happy moments ahead! 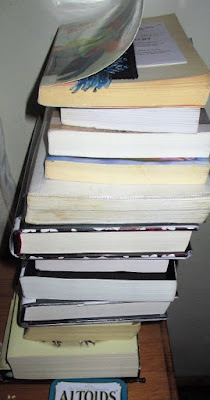