The Rest of the November Books

Here's the  end of my November book list. I have the second book listed below to thank for reminding me about making ricotta.

Murder in Midwinter by Lesley Cookman
Last summer, Bill called in at a po-up charity shop and picked up a pile of books he thought I’d like, including several cosy mysteries. There were two by this author--the second and third in her Libby Sarjeant series. This is the third. I read the second a few months ago, but saved this one until it was the season. It’s Christmas season and in Steeple Martin, rehearsals for the panto are ongoing and Harry and Peter are preparing for their civil partnership ceremony. One of Harry’s friends is found dead in a derelict theatre in a town nearby that was recently inherited by a woman from London. Libby and her friend, Kate become part of the investigation.

Sweet Honey, Bitter Lemons: Travels in Sicily on a Vespa by Matthew Fort
The author is a British food journalist who visited Sicily in 1973 with his brother. He was in his early 20s at the time. He fell in love with Sicily and always wanted to go back. When he was 59, he finally did. He decided to make two trips, avoiding the summer heat. He planned a spring trip from one end of the island to the other through the centre of the island and an autumn trip around the coastline. He opted to use a vespa as his means of travel, because walking was impersonal and he felt he would miss too much in a car. He made food his focus, partly because that’s what he does for a living, but also because he knew it would give him a common interest with the people he would meet during his travels. The book is mostly a description of the food he ate and the interactions he had with local people. He also describes what he is feeling throughout the book, but this is fairly repetitive--he is often stuffed, blissfully eating, or sleeping off a large meal. There were a couple of particularly interesting moments in the book. One occurs when he is talking to someone about the wonderful bread he’s been eating and he asks if it was made with flour from the local wheat. He is very disappointed when the man tells him that almost all the wheat grown in that area is shipped to Northern Africa and the flour the locals use to make their bread comes from Canada. Another bit that caught my attention was his discussions of cannoli in particular and ricotta in general. I remembered having cannoli made with ricotta filling on the east coast of the US as a kid. Then I did not have cannoli for years. When I next had one, I was in Oregon and it was filled with marscapone cheese. When we lived in Niagara Falls for a few months, we used to go to a bakery and get some scrumptious cannoli that were also filled with marscapone (I think), as were the ones I had in Maine. But in Sicily, they are filled with ricotta, so that’s an actual thing and not just a figment of my imagination!!

The Nation’s Favourite Poems
In honour of National Poetry Day in 1995, the BBC programme, The Bookworm, conducted a poll to find out which poems people would choose as their favourite. The response was bigger than they thought it would be. This is a collection of the top 100.

Love, Nina: Despatches from Family Life by Nina Stibbe
This is a memoir in the form of a series of letters the writer sent to her sister between 1982, when she went to London to be a nanny (for Mary Kay Wilmers, then editor of the London Review of Books) to 1987, when she was finishing up an English degree. They were chatty letters with lots of dialogue and humour and gave a good sense of what was going on. The book was not published until 2013 and most of the people she talks about agreed to let her use their real names. Those who didn’t were either given a pseudonym or simply called, ‘X.’ The neighbourhood she lived in through the course of the book was home to many people in the literary world, which was new to her.

The Buddha before Buddhism: Wisdom from the Early Teachings by Gil Fronsdal
The italics are included everywhere the title appears on and in the book, so that’s how I’ll list it. ‘This book is a translation of a collection of ancient Buddhist poems often considered to be among the Buddha’s first teachings.’ These poems are referred to as ‘The Book of Eights’ and are said to ‘offer people a provocative challenge to live a life of deep, abiding peace.’ There is also commentary by the author/translator.

The Christmas tree lighting will happen this evening in Market Square, so I will set aside the book I am currently reading to go to that. The tree has been up for a week or so and this year includes ornaments. 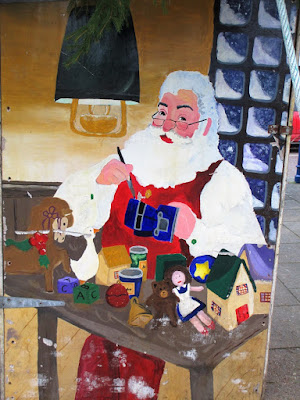 The photo above and the two below show the other sides of the box surrounding the trunk of the tree. 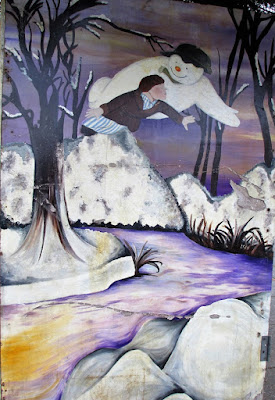 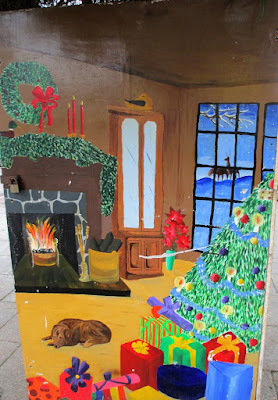