This morning Bill was outside clearing the back steps of snow! Winter came to Moville Thursday evening with hail, sleet, and a bit of snow and that stayed around for a while yesterday. It wasn't much, but must've accumulated on the roof. I was sitting quietly in bed last night with festive music on, preparing to pick up the yarn and hook, when the avalanche scared the crap out of me. I should have been prepared for it, since I'd heard stuff falling and pinging off the railing before that. The first time, I even opened the window and peered down with the torch in hand to see what was going on and to make sure our neighbour was not on the ground on his patio tiles, which are slick at the best of times. It was just the snow and ice, so I settled back in. Then it all came crashing down at about 1 am. Just as well we are night owls and were not startled out of a sound sleep by it. ⛄

Since it's cranberry season, I've been stocking up at veg man's stall while he has them. I've made jam, stuck bags in the freezer, and have made a couple of batches of yummy, healthy orange cranberry muffins for us to munch on with coffee. 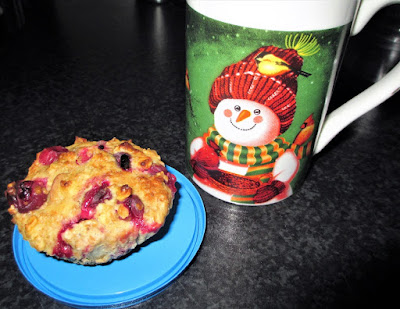 Preheat oven to 180 C (fan oven)/400 F. Place soaked oats in a bowl and add 1 to 3 tablespoons of (granulated, brown, or demerera) sugar (according to your taste) and one egg. Mix in.

Add 1 cup of wholemeal/whole wheat flour and 1 teaspoon each bread/baking soda and salt. Stir in until incorporated.

Fold in about a cup of cranberries (fresh or frozen) and a handful of sliced almonds, if desired.

Spoon into greased or lined muffin tins and bake for 15-20 minutes or until golden brown--timing depends a lot on the oven, so I just keep an eye on them.

These are really good as they are and we don't use butter or jam with them, but you could!

The muffins sound delicious and healthy.