Knitting by Anne Bartlett
The setting for this book is Australia over the course of about a year. Sandra, an academic who specializes in historical textiles, is still grieving the loss of her husband to cancer less than a year ago. She sort of plods through her days, feeling like she needs something more, but unable to do much beyond the basics. One day she encounters Martha, who has stopped to help a man who has collapsed. Sandra also stops to help and the two women become friends. Martha is a highly skilled knitter, who developed her passion and skill for knitting as she recovered from a breakdown after some tragedies in her own life. Sandra gets the idea to stage a knitting show/conference that would combine historical knitting with text. She talks Martha into helping her. I enjoyed the book, although parts of it seemed familiar. I have either read it before or read an excerpt in a collection of knitting stories.

By Hand: The Use of Craft in Contemporary Art edited by Shu Hung and Joseph Magliaro
The title says it all, really. This is a collection of artist statements about how they use craft techniques in their artwork. Their ideas were interesting and the photos of their work enjoyable to look at.

An Irish Christmas edited by Stephen Newman
This little book contains material taken from the National Folklore Collection, which collected stories about Christmas traditions in Irish life. I think the most recent stories were taken in the mid-1950s, so the collection gives a flavour of what Christmas was like ‘in the old days.’ The traditions were somewhat varied across the country, although much was similar. In one instance, one person said people used to think that if there was a green Christmas, the graveyard would be lean, but if there was a white Christmas, the graveyard would be fat. The next person had it the opposite way. The collection is skewed towards the rural west of the country, according to the editor. This was a fun read that I found while scrolling through the library catalogue.

Cave Art by Bruno David
This is an overview of cave art. It covers everything from where the art is, what techniques researchers use to gather information, what has been found, dating techniques, what materials were used, and what researchers know (or think they know) about what it means. There are wonderful photos as well--and lots of them. It would have been worth checking out this book for the photos alone, but it was fascinating to read as well. It’s been a more than a couple of decades since I was in an archaeology class and technology has brought new capabilities and techniques to the field, allowing for more discoveries than were possible before. Fascinating stuff!

Hope you're enjoying a lovely, peaceful Saturday in your neck of the woods! 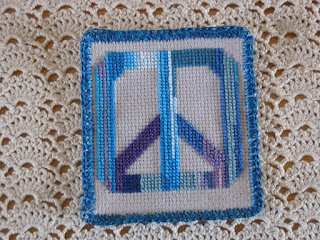