It has finally cooled off some here. The other day, I was making the jalapeno cheese puffs (recipe here) that we always have on 25 December and I was roasting! We only have one of the storage heaters on in our house, even though there are many of them. We turn on the one in the living room and that's it. Each room has doors that we can close to keep the heat where we want it and we have the door between the kitchen and the living room closed. It was quite mild for a week or so and then I had the oven on. It's a small thing, but it does heat up the kitchen. It had zoomed up to 65 in there and I had to rummage around for a scrunchy to put my hair up. When I was done, I was wishing we'd turned off the heat altogether, since it wasn't very cool in the living room, either. After a while I found things more tolerable. It was worth the discomfort, though, because the puffs came out great! I used some bottled red jalapenos and chopped up a red chilli pepper from veg man. 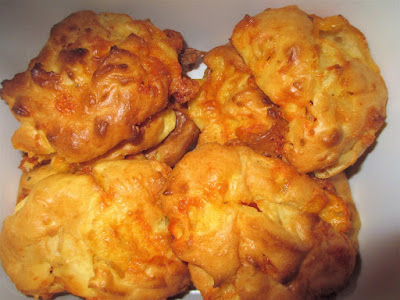 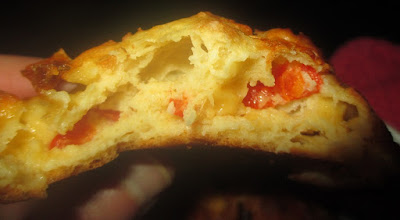 We still have a few left and will have them with some soup for supper.

Yesterday, I finished the border on this blanket wrap and wove in the last few ends. I'd been working on it the day before, but had to set it aside because it was too hot to have on my lap. 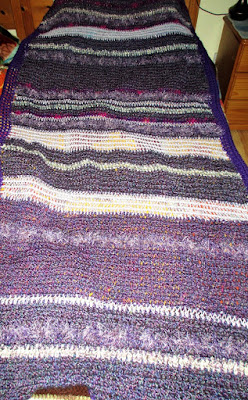 It's made with odd balls and scraps of textured, ribbon, and eyelash yarns and a 10mm (US N) Tunisian crochet hook. I chained 80 and did an extended Tunisian knit stitch until I was pretty much out of yarn and then did a narrow border in regular crochet with some plain worsted weight. I don't like doing regular crochet with this kind of textured yarn, so at first I tried knitting with it, but I didn't like that either, so I ripped back and began again with the Tunisian, which worked beautifully. There is also the added bonus of being able to easily weave in ends. This allowed me to tie smaller bits of yarn together and keep on stitching. Had I knitted it on large needles as I originally tried, I would have had to keep all my ends at an end--these kinds of yarn can be tricky to weave in properly anyway and with a loose knit it would have been impossible to do well in the middle of a row. Not a problem with the Tunisian, though, since there are solid ridges useful for hiding ends! The Tunisian extended knit stitch was a great stitch to use, because it creates openwork 'stripes' on top of a more solid 'stripe.' With bulky yarn like this and a big hook, had I used a more solid stitch, it would have been quite bulky and heavy. This has some heft, but it's not too heavy or bulky.

Since that was my big downstairs project to pick up and put down as I felt like, I will be starting another one later today. And now it's a bit chilly, I might just stick this on the bed.

Hope you're enjoying this week, no matter what the weather is where you are!
Share
Posted by Shari Burke at 27.12.17

Hello, Your jalapeno cheese bites look delicious. My husband and I would both love these. Thank you for your recipe.
The blanket is very pretty.
Our weather had been mild, until this week. We are very cold in the mornings (around 25 F). My kitchen is small, however, and when I do bake, it gets quite warm in there!
Wishing you a lovely day. I look forward to your next project.