I decided to make some chocolate bread this afternoon. I've worked out an adaptation of a wheat bread recipe for a bread maker in which I use the recommended amount of strong (bread) wholemeal flour, but less regular flour than is called for (whether that's wholemeal or plain) and add porridge oats. To make it chocolate, I add a 100 gram bag of dark chocolate mini chips. As I was getting the bread pan from the bread maker, it dawned on me that I could easily make it mocha by using strong coffee instead of water, whey, or milk, as I usually do. So I did. It came out great! I will definitely make this again. 😋 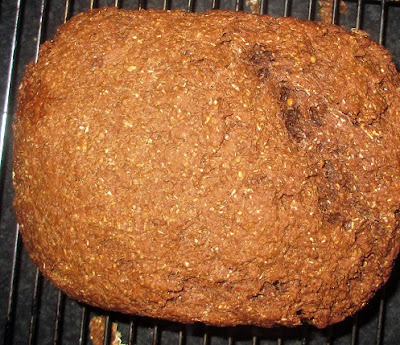 After some mild weather, it's gotten cold again and some mix of rain and sleet has fallen in between sunny spells. Bill went out this afternoon, but didn't go far, since it was 'slippy' in spots. I am still nervous after my fall over the summer--I still have some scars from that, but I feel fortunate to have escaped with no broken bones. I have spikes for my shoes, but they're not much help on black ice. So I stayed in, had a couple cups of tea, read, swatched for a new Tunisian crochet project, and looked at the sunset through the window. 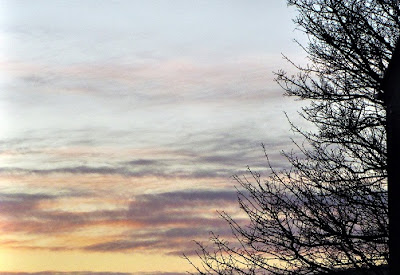 Hi, The bread looks delicious. With your weather being colder and black ice possibly on the ground, it was a good day for you to bake, sip tea, and look at your project. Sorry to hear you had a fall over the summer. I broke my ankle about 2 years ago and I am just now able to walk long distances again.