Bill had not been up to the garden in a while, but he went up there today expecting to pull up some plants and put them in the compost. He did that, but discovered that there was chard to be picked. 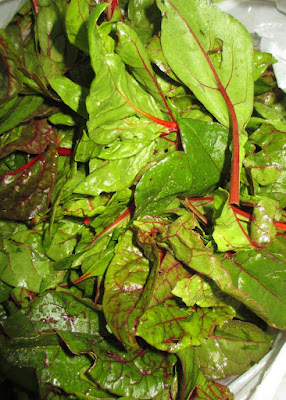 Since it's supposed to get cold tomorrow night with a chance of frost and some wintry mix for the next few days after that, he pulled the chard plants. We are deciding whether he should plant more seeds in the polytunnel, where he still has a few wee jalapenos, parsley, lemon balm, and lettuce growing. Someone grew lots of lettuce in the tunnel last winter and there seems to be no reason why the chard would not grow well in there.

People don't grow chard around here--we saw what we thought was chard in other people's beds earlier in the season, but then we realised it was beetroot. Bill said people assumed our chard was beetroot, so there was confusion all around. 😁

I used a bit of chard in the tomato sauce I made for supper tonight (along with fennel, courgette, garlic and onion) and will blanch and freeze the rest tomorrow. Our little freezer is currently stuffed full, but I will be removing some things tomorrow, so can fit the chard in then.

If Bill does plant more chard in the polytunnel, it will only be a plant or two, since we have chard in the freezer already. We also have most of the beans he grew in packets, ready to be added to soup over the winter. He discovered that he enjoyed gardening and approached it as a learning experience, since it was all new to him. He did quite well!

I have a small chocolate mint plant out back that I should probably cut back tomorrow.  It's pretty sheltered back there, but might as well get it in just in case we do get a hard freeze. And if it does get cold, a nice hot cup of chocolate peppermint 'tea' would hit the spot quite nicely.
Share
Posted by Shari Burke at 21.11.17