It's Tuesday and that means it's veg man day. He sets up his stall every Tuesday, except for the week between Christmas and the new year. Rain, shine,wind,  hail--whatever the weather, there he is under his awnings, surrounded by fruit and veg. Today he was trying to close a gap or two in the awning, because just as we walked up, the hail shower began. It was coming down hard for a few minutes and making quite a noise as it bounced around. Bill was angling for photos. I wasn't paying attention and messed one up--I was too happy to see that chilli peppers were back this week, after being absent for the last couple of weeks. I was reaching for the peppers and not paying attention to Bill, so he had to take the photo again in order to have one without my arm in it.

By the time I saw the chillis, I was already irrationally pleased because veg man had bags of cranberries. Yippee! I was able to get cranberries when we lived in Ballinrobe at both SuperValu and Tesco, but they did not show up until mid-December and they came in punnets in plastic bags--too much packaging and the punnets took up room in the freezer. Once we left Ballinrobe, I did not see them in any of the stores we went to. The ones I got from veg man today are in a bag without the punnet and there are more cranberries, so less packaging, which is good. I got 4 bags. If he has more next week, I'll probably get some more. I've put one bag into the freezer already. I plan to make cranberry jam with a bag or two. And later in the week, I will make some orange-cranberry-oatmeal muffins.

The big tree is up in Market Square. The Christmas lights are strung across the roads. Tree lighting is Sunday night. And shops windows are decorated and fun to look at. I particularly liked this guy, who lives in a shop window down the road from us. 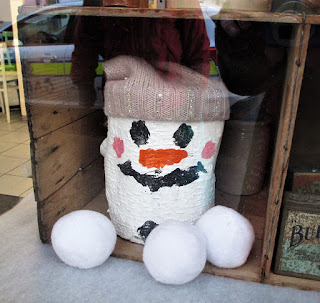 A little while ago, we had another hail shower--they've been coming off and on for a few days. There was a festive nip in the air today. It's the most wonderful time of the year, after all!