I've been having fun playing with scraps lately.

I had more of the autumn-coloured yarn left after I finished the blanket and made a placemat, so I made a simple 'curtain' for the window in our front door. I finished the last few rows last night after we got home from our jaunt to the Twin Towns. 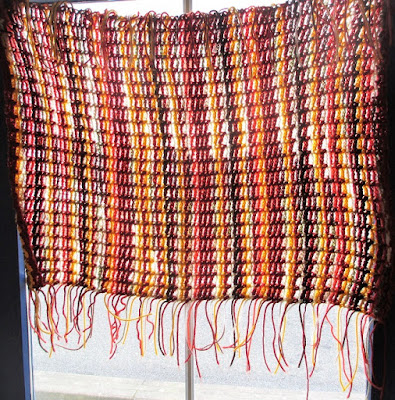 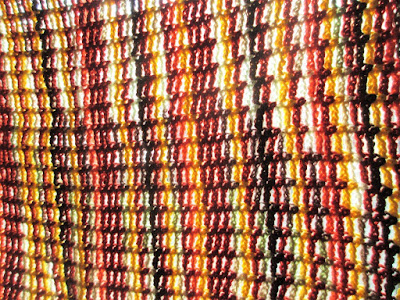 It's a simple sc, ch3, sc across, leaving a tail at the beginning and end of each row for fringe. I cut the yarn after every row and started back at the beginning--the front of the work was always facing me. 🍁

I still have a few scraps of this yarn left, which will go into my scrap bag for use in a future scrappy project.

Last week, I used some cotton scraps to make a seasonal dishcloth. 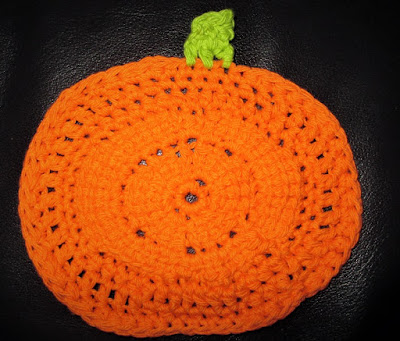 I had a chart for a pumpkin motif which I liked, but it was not going to work so well for a dishcloth. The centre contained lots of very tall stitches, which means space in between them and the outer rounds were dc with chain stitches in between, so more open space. I ended up using the stitch count (mostly) and the height of the stitches as shown in the chart, but I tweaked the count where necessary and I used linked tall stitches so there would not be space in between. Then I just made up the last couple of rounds as I crocheted. 🎃

Who doesn't love a friendly ghost? I used some white and a wee bit of black to make this guy. 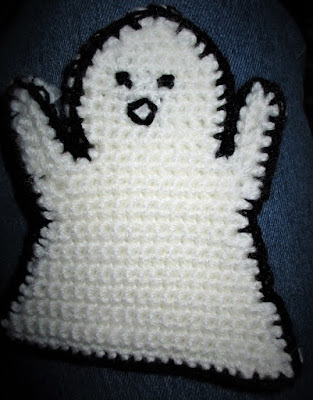 I think I will make one or two more of these--I'll see how long the white lasts. 👻

I am not quite sure what I will work on next. I have a couple of projects in mind to start and I have my second sock here by the couch. I worked on that a bit today and got the heel flap done, the heel turned, and the gusset started.

I hope it's a good day in your neck of the woods!