I felt like felting again this morning, and had a couple of ideas, so I sat down with my second cup of coffee, my roving, and my barbed needles, and created a couple of pieces of felt. The first one went off in an unexpected direction, so after I'd finished it, I set it aside. I am pretty sure I know what I'll do with it, but I have to make a few more bits first and there is still time for it to veer off on another as yet undiscovered path.

Then I started on piece number two--a simple circle in a couple of shades of brown. After that was done, I dragged boxes out from under the bed and the corner shelf so I could have a rummage through various receptacles containing found objects, beach combing finds, and deconstructed jewelry bits. I chose some and started playing around. My original intention was to make a two-sided piece for the window, so one side would be facing out and the other would face us in the room, but I quickly realized that it would work, but it would have to be done by making another piece and sewing them together. I might do that, but for today I completed the piece and it's now hanging on the wall. 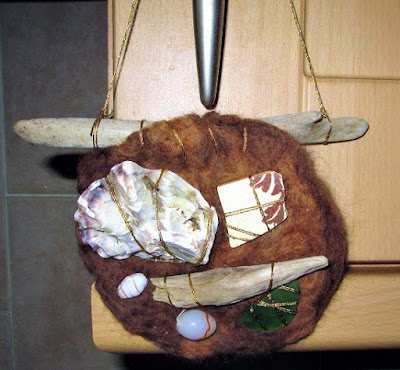 While I was sewing stuff onto the felt, Bill was looking at ebay to see if anyone sells roving. I was overjoyed when he said that the woman he got the kit from a couple of years ago sells random grab bags of scraps in various colours and fibres! Since I work as much as possible with orphan materials, this made me irrationally happy. Bill ordered two bags, since shipping is free for the second.

I have already been practically giddy for a while. In addition to all of the things I am continually grateful for, it's finally autumn, the days are not as long or as warm, I've been able to close the windows, October has arrived (and with it my best quarter of the year), we had a few days away in a nice place, and now I learn that I can buy scraps of roving to felt with! Yippee!