Whales and Dolphins at the Library

We went out to do errands this afternoon and instead of saving the fun stop for last, we started at the library. We returned stuff and chatted with Gerard. He'd picked up one of the books I requested at the Carndonagh branch and brought it with him to Moville today, so it was there. It's a novel called Inch Levels, which is the name of a place in Inishowen. The review I read said that it captured the contradictions of life on the Inishowen Peninsula and really illustrated Irish mannerisms and ways of speaking. How could I not request it? Hopefully the story is good, too!

They're using a new courier to move requested material around the country and there are a few glitches, so the rest of the 'in transit' stuff had not arrived. While we were there, someone did drop off a box of stuff, though, and there, at the bottom of the pile, was a Celtic cross stitch book I'd asked for. Great timing!

Inishowen Whales and Dolphins has a nice display up in the library, along with this guy, who is just hanging around 😁🐋 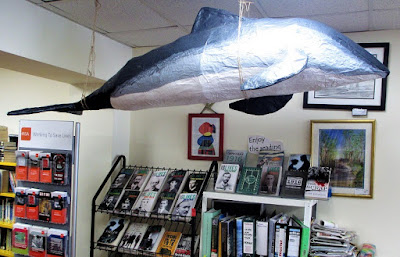 The group put up a nice informational display--this is a piece of it. 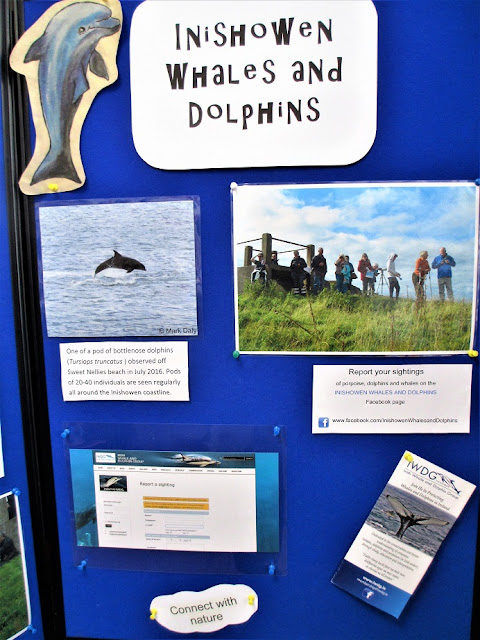 After we left the library, we went and got a bunch of groceries, which is not as much fun as the library, but it is nice to have food around the house.

My leg is doing a lot better. I carried home a full backpack, walking uphill and did not have any pain.  There is a slight autumnal feel in the air at times, so hoping I will be able to venture out more often now without feeling crummy afterwards. I do find myself being a little bit fearful of falling again when I am out, but I suppose that will fade eventually--at least I hope so. For now, I am just appreciating the fact that I am healing!
Share
Posted by Shari Burke at 13.9.17