When I received a bunch of yarn in colours that shouted 'Autumn!!!' I decided almost immediately to make a blanket with it. I had one idea, started it and was not really into it. It was OK, but didn't seem right, so I ripped it out. I tried something else, but wasn't getting the kind of fabric I wanted, so I ripped that out, too, and began again. Third time's the charm.

I made 9 squares using crochet moss stitch on the diagonal, increasing on each side every row until it was as wide as I wanted it and then decreasing every row until I was at the opposite corner. I did a one-round hdc border around each square and set it aside. When all 9 were done, I embellished them using surface crochet, and motifs that were tatted, knitted, and crocheted. I left it for a little while after that, since it was too warm to connect the squares and have a big warm piece of crochet on my lap. When it cooled off enough, I put the 9 squares together and found that it was wide enough and I did not really want to add anymore width, so I knitted a panel at the top and the bottom. Then for a final border, I did a few rows of extended simple stitch in Tunisian crochet on either end and did a few rounds of slip stitch around the whole thing. This added the variegated border without adding any more height or width. 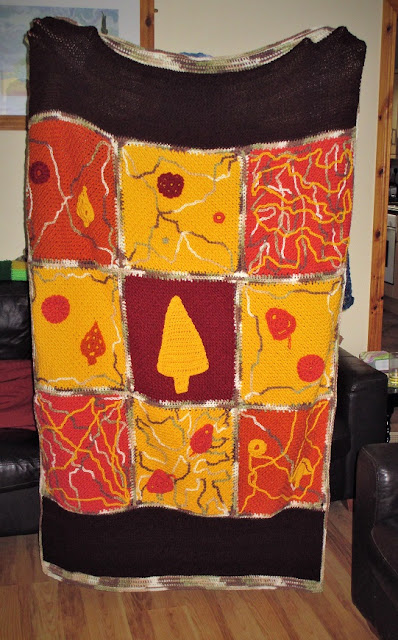 I had a lot of fun with this. I was never sure where I was going to go next with it next and then suddenly it was done. I enjoy making blankets a lot because they lend themselves well to experimentation and inprovisation. They can also be completely mindless, which is sometimes exactly the right thing! When I was in grad school, I made blanket after blanket for just that reason. I was extremely busy with my classes, research, and job, had a daughter in middle school and Bill was working graveyard shift. Fifteen or twenty minutes of mindless crochet back and forth and row by row was very relaxing after a long day!

Now I am wondering what my next project should be. I'm sure I will figure it out and in the meantime I have a couple of smaller things I could work on.

--rep last row until sides of triangle are half the circumference you will want your sweater to be (if you want a sweater that measures 36 inches around, keep increasing until the sides measure 18 inches across)

Now you will begin decreasing.

--rep previous row until you have three stitches left.

Using this stitch diagonally is great for scraps, stripes, colour changing yarns or you can make one half of the square in one colour and the other half a different colour, as I did for this jumper 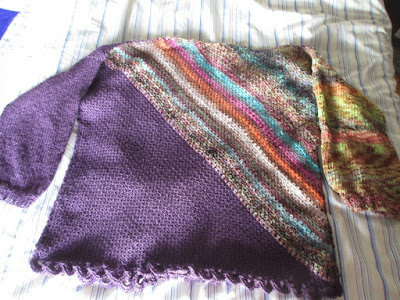 By just doing the first part, you can make a nice shawl--just stop increasing when it's as wide as you want it. I made this shawl in this way, alternating colour each row and leaving the tails as fringe. 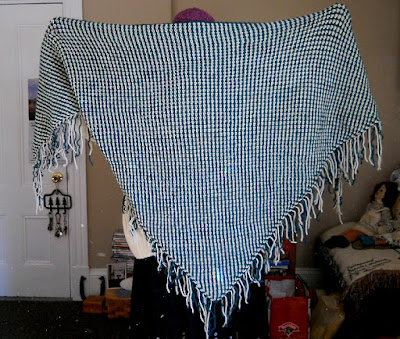 The way the stitches are places gives it the appearance of vertical stripes, but only one colour was used to crochet each row.

You could also just do one large square or rectangle to make a blanket that way. I made this one years ago for the dogs we had then. I made this one with a big hook and using two strands of worsted weight held together. 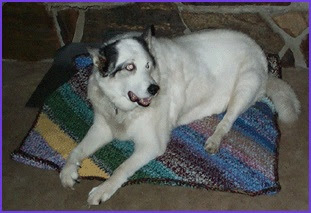 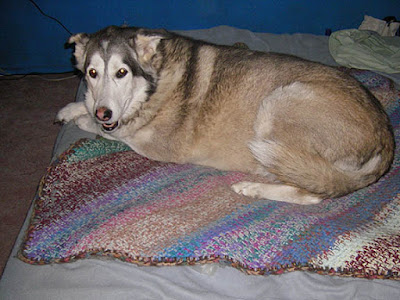 As you can see, I like using this stitch in this way and have used it a lot. It's so versatile! It probably won't be long before I am using it again. 😊
Share
Posted by Shari Burke at 28.9.17

I love your blanket, I coo feel the cold in winter and have a couple of crocheted blankets my daughter made me to snuggle under. I can crochet - learnt two tears ago - but am still really only at granny square level. I do love knitting though.
Best wishes to to both of you. I've had no internet connection for a while and am just catching up with blogs I enjoy. I was so sorry to read about your fall, do hope you're feeling well again.
Lesley

Sorry - that should read 'do' not 'coo'. Wretched auto correct!

I am doing well--my fall was 2 months ago today and I am just now starting to try to get moving again. Gotta build my stamina back up!

I do enjoy making blankets and I always seem to sleep better with a knitted/crocheted on on the bed!

Hope your week has started off well!