I got out the knitting needles yesterday and made a few scrappy napkins. 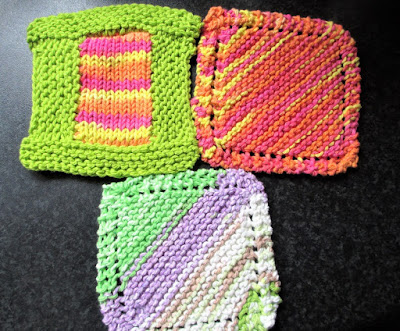 There were two wee scrap balls of the bright pink/yellow/orange cotton and 3 or 4 smaller balls of green/purple/variegated. I did Russian joins to make one larger ball out of the hot colours and another out of the rest, then made the two diagonal cloths. I still had some of the former left, but not enough to make another cloth, so I made a couple of rectangles in stockinette then did a garter stitch border in the green. I counted wrong and one side is a row narrower than the other, but I decided to leave it alone, since it's a napkin and it doesn't matter. I still have another rectangle that needs a border, which seems like a good thing to do later while listening to an e-audiobook. I also have a pair of socks on the needles. I have a larger crochet project upstairs that is not too far from finished, but it's too warm to have it on my lap at the minute, so have been working on smaller things while I daydream about cooler weather. Thankfully, there's a yarn or thread project for just about any situation so I can keep calm and carry on.

Hope your day is filled with small bits of brightness that add up to something good!
Share
Posted by Shari Burke at 25.7.17