Following on from yesterday, here is the middle section of my June book list:

Reading Allowed: True Stories and Curious Incidents from a Provincial Library by Chris Paling
I had not heard of this book until Gerard, our local librarian, pulled it out of his bag one day and showed it to me one Wednesday afternoon. He was going to take it home with him, but insisted I take it first. I started it that day and finished it the next so I could get it back on Friday. I loved this book. It was a mix of amusing and alarming anecdotes about working in a library in the UK and interacting with some of the people that come in, the ways in which libraries are important to communities, and the threats libraries face in times of austerity. I did a brief stint as a worker bee in a library in rural Oregon and I was just a few pages in when I was reminded of that time and some of what I experienced. There were also differences between what the author describes and the way my job was defined. I worked in the circulation department and the scope of things I was allowed to do in terms of helping people was very limited. At times, I ignored those rules--if I was shelving and an elder came up to me asking for help to search for something in the computer catalogue, I helped them even though I was supposed to send them to the queue at the information desk, for example. But there were situations when it was very handy to be able to say to someone, ‘I’m sorry, I’m not allowed to do that. You have to ask that person over there.’ There were some times when the author would have liked to have had the same excuse, I suspect, and in one particularly unpleasant bathroom incident, he was relieved to be able to call Facilities to sort it out. There were several times while I was reading the book that I read long passages aloud to Bill, so that’s one indication of my affection for it! My one quibble is with the title--it says he's in a 'provincial' library, which makes it seem like a small library in a small town or village. It's clear from his stories, though, that he is in an urban area and working mostly in the central library in that municipality, only occasionally doing a shift in one of the branch libraries.

Wired to Create: Unraveling the Mysteries of the Creative Mind by Scott Barry Kaufman and Carolyn Gregoire
I came across this book title in an Atlantic article on creativity and the brain in which it was referenced. I was going to request it from the library in book form, then had a vague memory of seeing it in the e-book collection. Sure enough, it was there and available, so I downloaded it. The book is something of an overview of research into the subject area and covers many different topics related to creativity as studied by brain scientists and psychologists. The studies seem to indicate that the ideas people have about creativity being a ‘right brain’ activity are too simplistic, as many parts of our brains impact creativity. They talk about ‘messy mind’ and the ways in which highly creative people can seem to have contradictory things going on at the same time. Other issues discussed are introversion/extraversion, the role of trauma in creativity, conformity/non-conformity, the help and harm of ‘mindfulness’ in creativity, and to a lesser degree, cultural and societal institutions and the role they can play in stifling creativity. Since creativity and the creative process is a topic that interests me greatly, I have read some of this before and it was not new. But some sections of the book offered food for thought and made me think about my own life. I was also thinking back to some life story projects Bill and I did years ago with artists and members of a quilt guild and how the findings the authors were writing about did and did not apply to the lives of the people we interviewed. I have another e-book about creativity on reserve, though I think that one may come from a different perspective than this one. Guess I’ll find out when it becomes available!

A History of Ireland in 100 Objects by Fintan O’Toole
The author chose 100 objects that represented important aspects of Irish history. The book is organised with a photo of an object on one page and then a description of its provenance and what it illustrates about the culture and society of the time. I found this book because I’d read a few books by the same author when we first arrived in Ireland and found them very helpful in terms of giving me some context for things I was observing. One day recently, I got to wondering whether he’d written anything since, so I clicked to the library website and searched. This one came up. Having listened to and very much enjoyed a podcast several years ago on BBC Radio 4 called A History of the World in 100 Objects, I was pleased to see the same idea applied to a book specifically about Ireland. I enjoyed this book a lot. Some objects were more interesting than others, of course, but overall, it was fascinating.

Hope you've got lots of good reading for this July weekend! 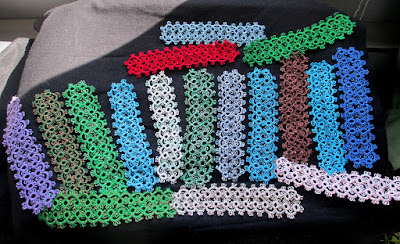 Those are very pretty. Are they bookmarks you have made? I can crochet a little but prefer needlepoint or knitting. I've thoroughly enjoyed Simon Garfields edited diaries from the Mass Observation archives 'Our Hidden Lives', 'Hidden Battles' and 'We are ar War'. I haven't read 'Timekeepers' yet, it's on my 'To be ordered' pile.
Best wishes to you both
Lesley

Thank you, Lesley! The bookmarks are part of a bunch that I needle tatted and gave to the staff and volunteers our local library In Maine, just before we moved to Ireland. I made them all in different thread combinations so no two were alike, put them all in a bag with a note explaining that they were a small token of my appreciation for the work they did to keep the library humming along, and placed it in the book drop. I didn't sign the note, but I am pretty sure they easily figured out who left them!

I have done a little bit of needlepoint through the years. I do some cross-stitch. Mostly I go back and forth between knitting, crochet, and needle tatting. Don't have a knitting project on the go at the moment, but have crochet and tatting in progress. Might have to cast on a pair of socks soon, though--starting to have some thoughts about that and went through my knitting stitch dictionary a few days ago to think about stitches I'd use.