I was thrilled this afternoon when we walked towards the local grocery store and saw some hydrangeas outside. I'd decided I'd look for one and a big pot to plant it in so I could stick it out back. I was hoping for a purple one, of course. They seem to grow so well here and in some many gorgeaous colours! We used to have a cat who we ended up calling Queen Hydrangea, so this one's for her! 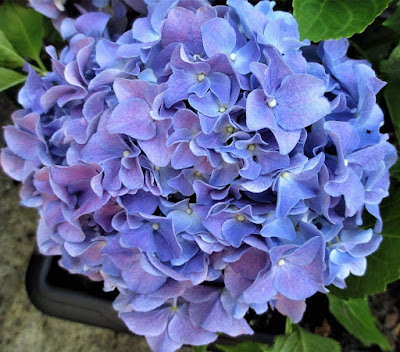 As we were on our way home, we stopped to chat with a woman who was tending her window box flowers. I'd seen her in the shop before I grabbed the plant and the pot. She said, 'Oh good, you got one! Isn't it a beautiful day?' Weather commentary is always the conversation starter here. It's warm and sunny, so that means there are a lot of giddy people. I untruthfully agreed with her about the extent of the day's beauty and then I asked her about the hydrangea's sunlight needs and she said they're hardy and as long as I water it, it'll be fine. She commented that we'll want a bigger pot for it, then saw that we had one. Then she laughed and said, 'This is Ireland. You won't need to water it much!' Then she told a story about one of her plants that she took a cutting of when she moved. She was getting frustrated because it wasn't growing and she was fussing over it. Then she saw a tiny bud. She said it probably wanted her to just leave it alone so it could do its thing. 😎

We've repotted the poor thing now--it was hard to get it out of the tiny pot because the roots were so tight and coming out the drainage holes. I hope it likes it out there.

Last week, when we walked up to veg man's stall, I spotted these and fell in love with them. 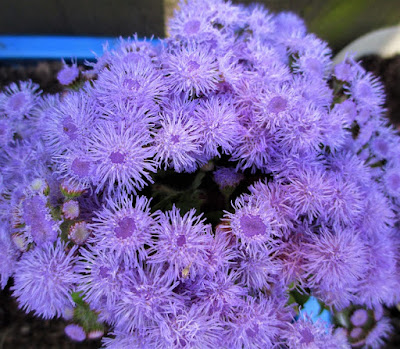 I asked what they are, and if they needed a lot of sun. He told me the name, but I didn't catch it, so I googled 'fuzzy purple flower' when I got home and the image came right up. They are apparently called 'floss flower.'  Veg man said they can tolerate sun and shade, so I got one (good thing, too--he had none today) and then later thought I should've gotten two, so I went back and got another one and a geranium. 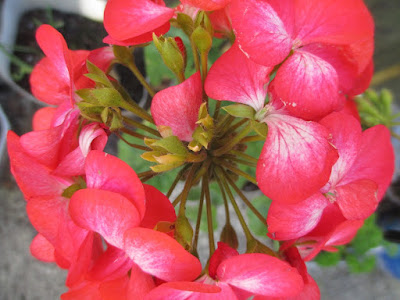 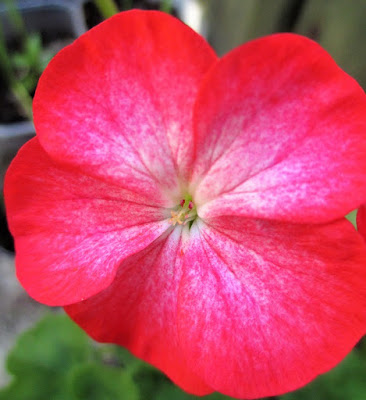 I do not think the colour in the geranium photos is quite accurate--the flowers are brighter in person. I love looking out at them while I'm working in the kitchen. They are in a location that gets a few hours of sun on sunny days, some filtered sunshine, and plenty of shade. The colours really pop no matter the light, but by evening, when I am cooking supper, they are in shade. They almost seem to glow.

I think that there will not be much sun for the next couple of days at least, but I'll keep an eye on the hydrangea to see whether it needs to be nudged over a bit to get more sunshine. The floss flowers and geranium have been where they are for a week and seem to be happy, so that's good.

I hope you find some beautiful things as you go through your day, too!
Share
Posted by Shari Burke at 18.7.17