I decided to experiment with the bread maker today, so I adapted a recipe for plain light wholemeal bread to see how light wholemeal chocolate coconut bread would come out. The answer is that it turned out to be delicious! The bread maker beeped a while ago and after a bit of cooling time, I cut a couple of slices, which Bill and I have just finished. We agree that we love it, so I'll be making it again. 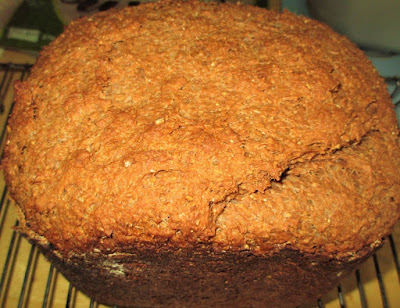 I used three parts strong wholemeal flour and one part regular flour (slightly less of the latter than the recipe called for). I tossed in some porridge oats, increased the amount of sugar a little bit and decreased the amount of yeast by a third. I dumped in a 100g bag of mini dark chocolate chips, which melted as the paddle was paddling (I'd used hot water), some coconut, and a bit of almond extract.

I was really pleased with the results--slightly sweet, but not sickeningly so.

I've used that particular recipe before--it was the test loaf after we brought the bread maker home from the charity shop and it's quite good plain, but also works well as a jumping off point. Some of the other recipes in the book require more ingredients, but this one is nice, basic, wholemeal, and uses stuff I always have in the kitchen. It's a good one to tweak for varied end results using whatever I happen to have around on a given day. I am thinking that the next attempt might be some lemon poppyseed.

It's a lovely relaxing Sunday in our house. I hope it's the same for you!
Share
Posted by Shari Burke at 25.6.17