It's Tuesday, so the first thing we did after breakfast was to walk down the street to Market Square so we could call on veg man, the traveling greengrocer. We brought our produce home and I unpacked it, freeing the bags for the stuff we needed to bring to the garden. While there, I pulled the coriander (will plant more in a pot that we will hang in the polytunnel--this stuff was too woody). This freed the space for a pepper plant that was ready to spread its roots farther than the wee pot would allow. I picked a bunch of stuff--chard, parsley, fennel, a few spinach leaves, the last radishes. I scraped the weeds up by (gloved) hand in the side bed in the polytunnel and took a hoe and scraped up the ones in our outdoor bed. I was out there ready to plant a chard plant and thinking that there used to be something in that space when I realised that the large cauliflower plant we had there was completely gone. It was there Saturday when we were chatting with our garden 'neighbour' between our beds, but you'd never know anything was ever there to look at it this morning. I am not having good luck with cauliflower. Everything else looks good. I planted a few more bean seeds and the rest of the leek seeds I had in the outdoor bed. The tomato stems that I had rooted got planted in the polytunnel. We watered the stuff inside. I was working at a pretty good clip so we could get done and come home. I have done my bit for the week and Bill will take over now.

I have noticed that I cannot spend too much time there at this point. We went on Saturday to set some stuff I'd made on a table for the cottage market, but there were few tables and they all were taken, so we chatted for a bit and came home. This was a relief because I was sorry I'd agreed to participate in the first place. The addition of a screaming child made me even more happy to get away! As it happens, it was just as well--I would have been miserable for the rest of the day had I stayed there for hours. When we went back in the afternoon to pick some stuff, we chatted with a few different people as the event was breaking up. We were there for maybe 20 minutes, but when I got home, I had sinus pressure and my arms were itching like mad--as is happening right now. I had forgotten until then how my arms used to itch like that when we would go to the farm in Maine to pick up our CSA produce every week. I reminded Bill of how I used to joke that I might enjoy gardening more if I could do it in the winter. It's not really a joke, I guess, and this year I will have the chance to do some winter gardening in the polytunnel. That's more my thing, I think. I enjoyed the process earlier in the year. I am not enjoying it anymore.  For now, I'll be spending less time up there until we get past summer and when I do go up there, I'll take an extra pill in an effort to avoid ruining my whole day with the aftermath.

I noticed this planter on Saturday, which I thought was cute. I'm told it's been there, so I guess I just wansn't paying attention! 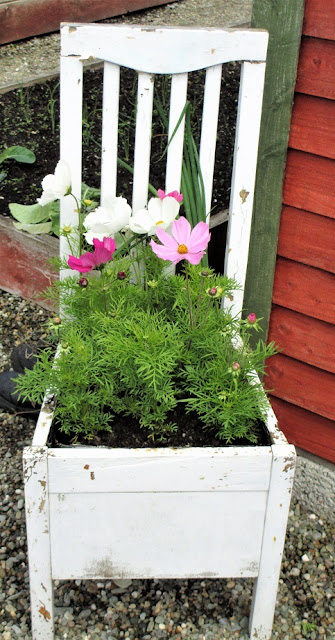 On Sunday, our electric shower stopped working. Someone was supposed to come and replace it tomorrow, but they have just cancelled and said they will contact us to reschedule 'in the near future' whatever that means. In the meantime, we do what we did when we lived with no running water for two years in Alaska and would use pitchers of water dumped over our heads. It's easier here because we do not have to heat the water in a kettle and we (luckily) have some milk jugs that I was going to cut apart and use to stick plants in. I had not done so yet, so we have a few we can use as our 'shower' until the 'near future' turns into the past and we have a working shower again.

Now I have a few free hours until it is time to make supper, and I have a book and a crochet project calling my name, so I am off to heed the call!

I hope your Tuesday is wonderful!
Share
Posted by Shari Burke at 13.6.17