One morning last week, I forgot to turn off the yoghurt maker at exactly the 10 hour mark. By the time I remembered to turn it off, it had been on for about 10 1/2 hours. That turned out to be a happy accident, because that batch was a little bit thicker than previous batches, both before and after straining. I decided to leave it in longer on purpose next time and got the same result, so that's now how I will do it going forward. It's good when the yoghurt is thicker because then it does not get too thin and watery when I add fruit. We had some for dessert the other night with a bit all-fruit raspberry jam and thawed frozen blueberries (I had coconut; Bill didn't). It was so good! 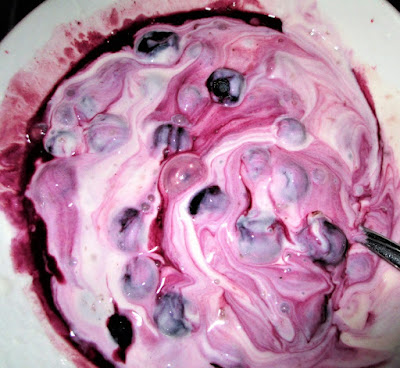 We picked up some milk today, so I'll be putting a new batch in tonight.

Bill picked some more cherry tomatoes this morning at the garden. We'll have some of them in wraps tonight for supper, along with some herbs from the garden, cucumber, and some of the caramelized onion/red pepper hummus I made today. While we were getting milk, we snagged the last package of wholemeal wraps at the shop. 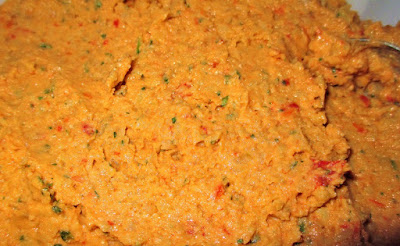 I always think hummus looks so much more appetizing in person than in photos, for some reason.

I'm glad to have a batch of that made--makes things easier to have things in the fridge and ready to eat. Now my lunch is sorted for the next few days.

Most amounts are approximate, because I don't measure for stuff like this, but to make the hummus, I used two cans of chick peas, the juice of 1 1/4 lemon, about 3 tablespoons of tahini, some granulated garlic, and some olive oil. There's oil on top of the tahini in the jar, so I used some of that as well. I used enough of the oil so that the texture would be smooth, but not so much that the hummus got loose and/or runny. Oh yeah, there was a bit of dried parsley and some fresh snipped in there, too. I chopped an onion and a pointy sweet red pepper and cooked those in some olive oil, before adding them to the chopper. Then I whizzed it all up. I sampled it, to see if I wanted to add anything else and it was good as is, so I left it alone. I can always add stuff later to part of the batch, if I want to change it a little! 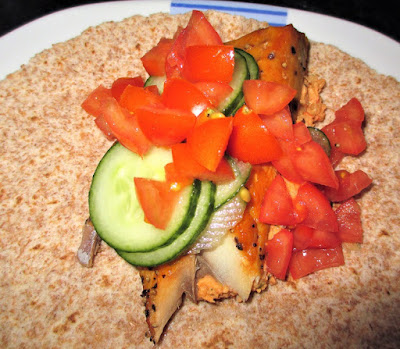 Here's hoping you're enjoying this day, wherever you find yourself!
Share
Posted by Shari Burke at 28.6.17