Off Limits For Now

Bill went to the garden by himself this morning, to water the plants in the polytunnel. Fortunately we had rain last night, so the outdoor plants were fine. The tomato plants are loaded with fruit and it looks like the first cherry tomatoes will be ready for picking in a few days. It won't be me picking them, though, because for now the polytunnel is off limits for me.

We've reached that point in the year where grass and weed pollen are all over the place and the population of fungal spores is thriving--especially in places like that polytunnel. I'd already become aware that I had to limit my time in there based on how I felt whenever we went there. The other day, I tried to get things watered and tie up some tomato plants as quickly as possible. It was not as hot in there as it had been on our previous visit, but it was still far too warm (for me, but the tomatoes are happy!). Of course the plants are not the only things that like hot and humid conditions--the mold must be flourishing. It did not take long for me to feel the effects of my time in the tunnel. I spent the afternoon sitting on the couch with my eyes closed, my stomach upset, and my head pounding. I'm done in the tunnel until autumn. 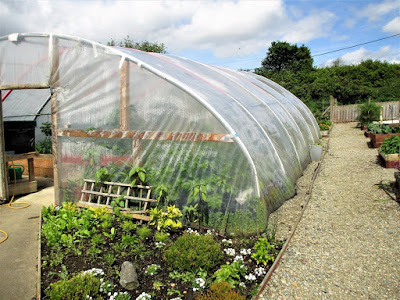 In addition to avoiding the tunnel, I am getting into the habit of checking the Met Eireann website each day. They have a page where I can see what the levels of grass, tree, and weed pollen will be for our region, as well as the fungal spores. So some days I will also be limiting my time outside. Last summer I experienced many non-functioning days, feeling sick in bed, because of the allergies. Much of that was probably due to the mold-infested apartment, but some of it was also because of something in the outdoor environment. In the other places we lived since we came to Ireland, I had almost no issues, so last summer was a surprise. It was also extremely frustrating, so I am trying to be proactive this year and limit my exposure.

I know that I will continue to be uncomfortable no matter what I do. I am used to that and it's one reason I find summer so unpleasant. However, that is different than being unable to function because of pain, nausea, brain fog, and the rest. I would really like to limit those days so I have as few of them as possible. The summer will pass and the pollen with it. I'll be glad when it does. In the meantime, I will do what I can to take care of myself.

Today I went to the library, where I had a few books in--it always feels like Christmas when the requested books arrive. I started a new book this afternoon with a nice cup of tea. I have a knitting project started as a break from the large thread crochet project I've been working on for several days straight. I was starting to feel an ache in my wrist and hands, so will switch for a few days. A Good Read is on BBC Radio 4 tonight and I will knit while listening to that. I made pizza for supper and that was delicious. I'll be turning on the coffee maker shortly.

I've had a very pleasant and relaxing day. I hope you are having the same sort of day wherever you find yourself at the moment!
Share
Posted by Shari Burke at 23.6.17