For some unknown reason, while I was sitting in bed last night listening to BBC Inside Science and crocheting, some tatted motifs popped into my head. I'd been doodling with some thread a few years ago when we lived in Ballinrobe and ended up with a motif I liked. I did change some numbers to make them easier to join, but I had a few of the originals that I kept, thinking I'd find a use for them one day. Last night, they came into my mind as I was thinking about a piece of sea glass I'd taken out of the box where I keep our beach finds. I decided to leave the idea alone until this afternoon and I went on with my crocheting.

This morning I was off to the library where I helped someone with her crocheting and picked up a book that came in. Afterwards, I came home, had some lunch, put in a load of laundry, and grabbed a few of the motifs. When I put them with the sea glass, I found that I really didn't like it. What I had in mind would have worked with different colours--either the sea glass or the motifs--but as it was, I did not care for them together. I didn't want to make more motifs just now, so I let go of the idea and rummaged around for something else I could use in a different way with the motifs. I ended up with two shells, a different piece of sea glass and a small rock. 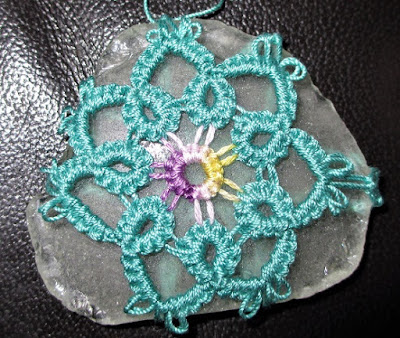 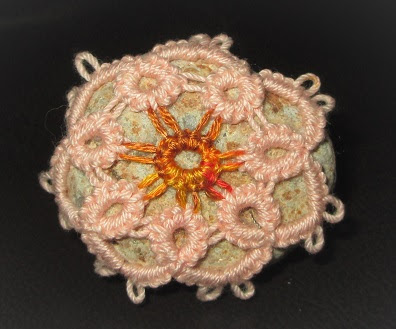 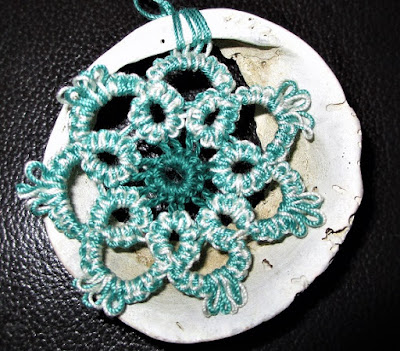 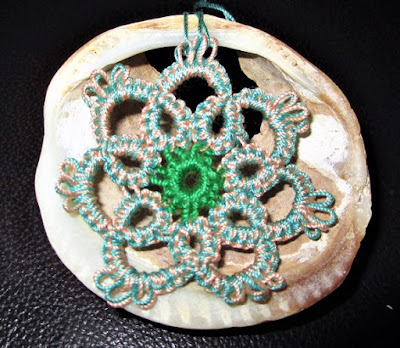 I'll add these to the small collection of stuff I've made for the cottage market at the community garden, which is tomorrow.

Tonight it'll be back to the crocheting, and I'll be listening to the first episode in the new series of A Good Read on BBC Radio 4--love that show!