Our Small Spot in the Wider World

This morning, Gerry (our neighbour) took Bill up the road to the garden centre to get some big bags of dirt. When they returned, he asked us if we could use a couple of chairs for out back. We were thrilled, because we'd hoped to find something for out there locally, like a couple of lightweight plastic chairs or some other easily carried chairs with no assembly required. We brought the dirt out back and Gerry went to his place and handed the folding chairs and table over the fence. It is quite a nice little set--made of wood and folds up flat. 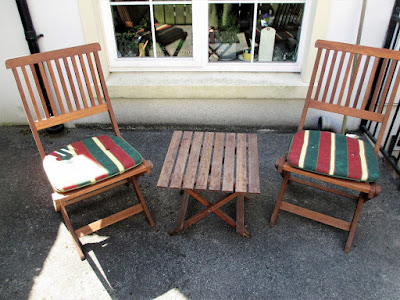 After I unfolded the table and chairs, I turned my attention to planting stuff. One of the bags of dirt had caught on a piece sticking out of the boot and had a hole. I decided to just plant some stuff right in there, so I enlarged the hole and made a couple of others, before sticking in some bean and chard seeds. Then I planted a bunch more stuff--lavender, potatoes, lettuce, radishes, leeks, some scallions I had in water in the kitchen window and some mizuna (I found my seeds--yay!). I was going to plant my lupine seeds, but it said on the packet that they should be soaked before planting, so I will stick them in the container tomorrow. I also transplanted a couple of houseplants that were in desperate need of more room for their roots. 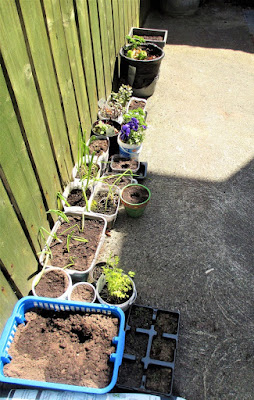 Before Gerry came by, the postman rang the bell and handed Bill a tube--the maps he'd found online had arrived. The walls here are cream-coloured and most are bare. There is a print over one of the couches, which we like, so we are leaving it there. In the kitchen there was some weird thing hanging on one of the walls, which we removed in order to replace it with something of ours. The thing about the walls here is that you can't just shove in a pushpin or tack or something to hang stuff--they just bend. In the other places we've lived, we either left the walls bare or we took down the stuff that was hanging there and replaced it with our own stuff. In this house though, we have one large wall in the living room with just the storage heater in front of it--nothing to break up the space. We figured we could use sticky tack to hang up our Ireland map, but that would leave a lot of space. We thought it'd be nice to have the Ireland map in the centre, flanked by a map of the world and a map of Europe. Bill found a place that sells such things online and they were having a 'buy 1, get one for half price' sale, so he ordered the maps we wanted. They arrived today. 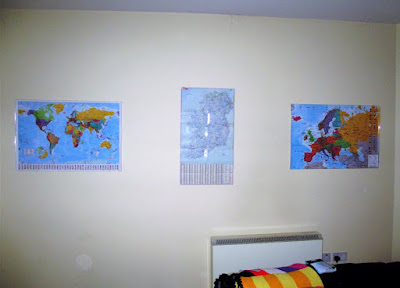 I like it! They are nice and colourful and interesting to look at--and now the wall is not just a large expanse of cream.

I feel very grateful to have such pleasant spaces to sit and read/stitch in, both inside and out. Now that we have chairs and a small table out there, I'll be able to sit there with my coffee and stitching or a book and watch my plants grow (fingers crossed). 😃

I hope you have some nice surprises in your world today!

The little table and chairs look like they'll be so nice to sit in and sip a slow cup of tea. Seems like ever since you've come to this house, things are just falling into place for you. Looks like you've found your spot!

Yes! So grateful! Everything seems different now that we are in this place and out of that toxic apartment!