Beautiful Above and Below

There was a gathering of gardeners at the community garden today. We got there a little early and scraped some weeds, watered, picked a few things, and looked happily at all of our stuff growing so nicely. The carrots are coming up, the bean seeds have sprouted, and it appears that one of the first cauliflower seeds I planted actually came up. We planned out where to put some more plants. One woman asked if we had any string with us. We didn't but I went home and got a couple of scrap balls of yarn for her to use and then leave there for anyone who needs it. No need to go buy twine! We chatted, drank tea, had our picture taken, and ate scones, apple tart, and banana bread. We got a list of when future gatherings are going to be. The next one is 10th June, but this one will be a little bit different, as it will be Open Day and Cottage Market. They got a grant from somewhere and having those kinds of things is a requirement, so I guess there will be more of them. They asked for people to bring stuff to sell, whether baked goods or art/craft items--in future markets, people will be able to sell produce, they said. It is not much notice, but I said I could probably get some small things made, so now I am working through ideas for that. We'll be able to come up with more stuff for future markets, but we plan to share any extra produce we might have, not sell it.

These flowers are blooming in a planter in the picnic table area--so pretty! I love spiky flowers. 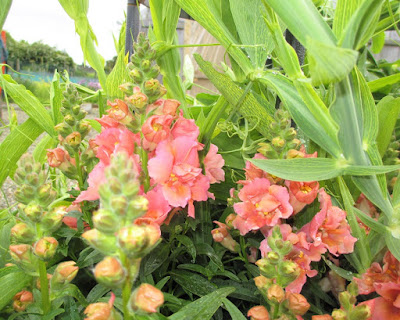 This was growing on the side of the road: 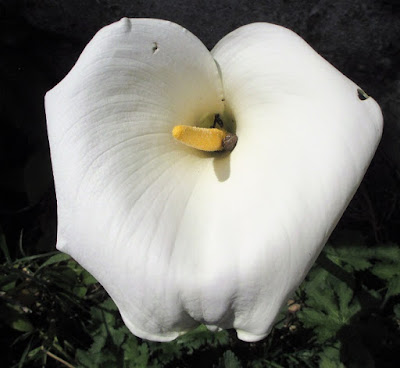 There was a downpour shortly after we arrived at the polytunnel, but those clouds soon moved along and it was just spitting a bit when I went home for the yarn. By the time we were walking home, there were fluffy white clouds and some blue patches on one side 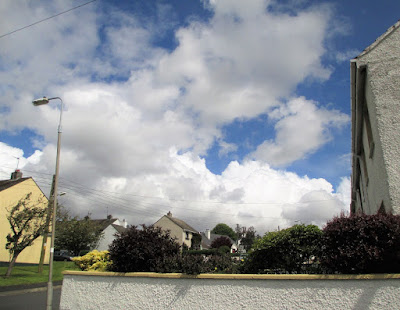 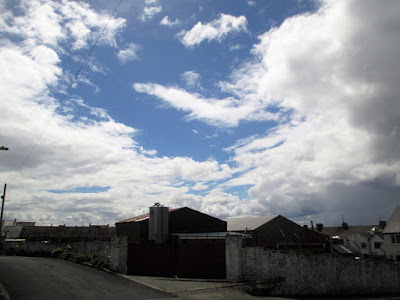 and complete grey on the other. The next shower started shortly after we'd gotten home.

Now I am off to make a cuppa and ponder possible projects for the cottage market, bearing in mind that there is not much time to get ready!

Hope you're having a wonderful weekend so far!