It's Still Only April

I've written before about the issues we had in our apartment and the health issues I've had over the past several months as a result. I am happy to say that things are so much better since we have moved into this house. I am sleeping again, which is huge. I wake up every morning grateful that I was able to sleep for several hours straight. I will never take sleep for granted again! The Bell's palsy issues with the right side of my face are mostly gone. It no longer droops, and is no longer numb, but I do have occasional burning. The Raynaud's is much better now that I am not standing on tile floors all the time. The feet issues around that are taking longer to clear up, so I still cannot walk for long distances. I also have very little stamina. That is perhaps the most frustrating thing.

In other circumstances, I would have whipped through this house as soon as we moved in--or even perhaps while we were shifting stuff from one place to another--and gotten everything put away. I had no energy for that kind of thing this time, so we did the living room, kitchen, and bedroom and let the rest sit. I finally got my stitching supplies organised this past weekend--and I found something I'd been looking for, which was great. That was the big project I had left, so now there is just a little bit of other stuff to put away. I have lacked creative motivation lately and that hasn't helped my mood. I've thought generally about various projects and not settled on where to start, so I have spent way too much time playing Tripeaks. This morning, though, I glanced at an afghan and the project idea just fell into place. Now that I know where my stuff is, I can start swatching today.

Since it's spring, I have no idea how much of my tiredness and lack of energy is due to what came before or because it's April, and it's time for my annual crud to start. I am a bit concerned about how this summer will go, because normally at this time of year, I am just starting after feeling good over the winter. I did not have my usual 'good' part of the year, so I am already starting at a deficit. I feel like I usually do in August. Since it is only April, that does not seem like a good sign. But there isn't much I can do about it, except do what I can do, muddle on, and make the best of it. There are some good exciting things to look forward to this summer, so I will focus on those and do what I can each day to help build my stamina back up. And I will keep on being really happy about living in this house, which I love.

We went up to the garden this morning to water and saw a hopeful sign of what might be coming! 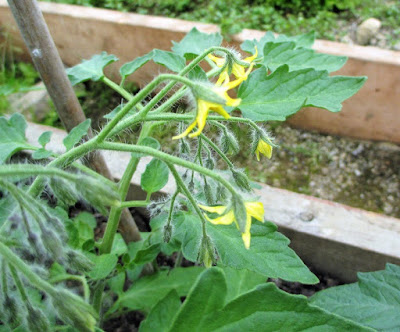 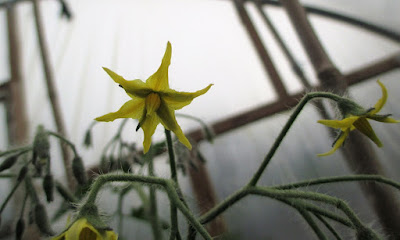 These are our first tomato blossoms, on a plant of the 'Tumbler' variety. Yay!

I picked more fennel and some coriander (cilantro). I thinned the radish sprouts and will use them in salad later.

For now, I am off to make lunch. Hope you are having a lovely day!
Share
Posted by Shari Burke at 27.4.17