It is Friday, so this morning I hauled my tired self to the library to help people play with yarn. I did not really want to go. Since my marathon sleep a week and a half ago, I have gone back to getting a few hours of sleep a night, one or two hours at a time. I would so love to go to bed and sleep for several hours straight. This morning I got up, had breakfast and a cup of coffee, looked at my watch, and realised that I had 45 minutes to spare. I put Lyric FM on the radio and crawled back into bed, spending that 45 minute interlude drifting between sleep and full awareness and listening to the beautiful music. Then I reluctantly got up again, dressed, and went off to the library.

One woman had learned how to make a crocheted ribbing last week and she finished that before she arrived today. I showed her how to join the strip of sc- through-the-back-loop rows into a tube and begin on the rest of the hat she wanted to make. She is using some yarn that someone walked up and gave her outside a shop and she is enjoying it a great deal.

Another woman was making garter stitch squares for a project going on in their village. Someone is collecting the squares and will be putting them together to make blankets. These will go to some organisation in an African country or countries to be given to what they call 'fish and chips babies.' According to the person collecting the squares, these babies have nothing to be brought home in besides newspapers, thus the name.

I brought some thread scraps and a hook and had time to make another wee flower in this strip I started a few days ago. It's handy, because each flower is only 3 rounds, so use just a few yards of thread. 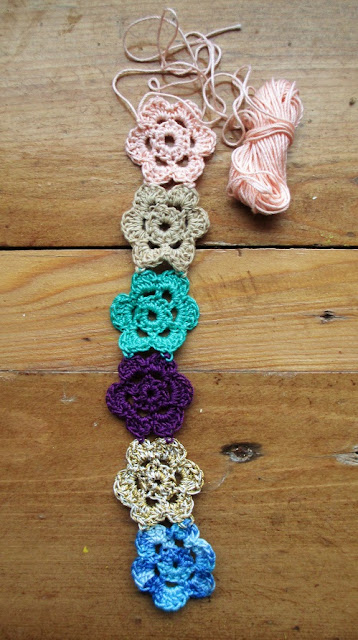 I am not sure yet what this will become. Bookmark? Necklace? Placemat? Pouch? I will decide sometime soon.

I have not been able to do much over these past few weeks. I had a gift project started, but was at a point that required attention and counting, so I did not pick it up while my brain fog was worse. The other day I was pleased to be able to pick it up and make some progress on it and I've been working on it a bit each day..

When we went to Sligo last week I brought a circular needle and a skein of yarn I'd gotten in a clearance box full of odd balls during a trip to Buncrana months ago. I loved the yarn in the skein--the colour, the silver thread wrap, and the sequins scattered through it. It was only 120 yards, so I knew I would not be making a big project with it. I decided on a thin infinity scarf, so I cast on 250 (I think) and just knit around and around. My plan was to keep knitting until I had enough yarn left to bind off, but I stopped earlier because the yarn was getting annoying to work with. It was kinking up and sticking to itself. I probably could have gotten another round or two from what I have left, but that would not have made a difference to the finished piece and I did not need the aggravation! Still, I like the scarf, which I learned will also work as a headband. 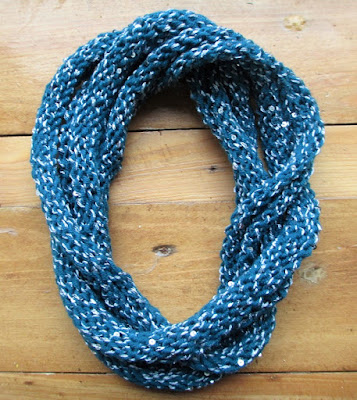 After the library ladies had gone to catch their bus, Bill and I headed for the shop and I noticed that one of the planters in Market Square had a daffodil. Poor thing looked like it had been blown and battered in the wind we've had for a couple of days. 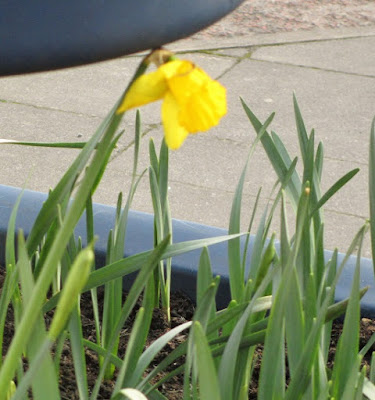 I had another 15-minute rest this afternoon. I am keeping my fingers crossed that when my head hits the pillow tonight, it stays there for hours and hours.I have stuff I want to do and it would be much easier without this foggy feeling!

Hope your Friday is fabulous!
Share
Posted by Shari Burke at 3.2.17