That Wind Was Sharp!

Yesterday, we went out to put a book in the wee free library. After we placed the book on the shelf, we wandered down a path that goes by the stairway leading to a small beach. In the summer there are always people down on the beach--kids splash around in the water and folks sit on the bench that is built into the wall. Not so yesterday though! The tide was in and there was not much beach showing. 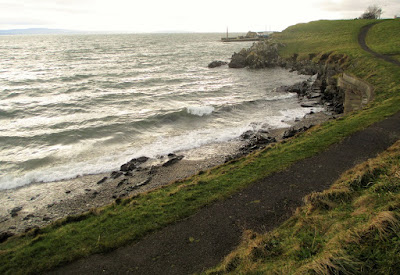 Besides that, it was cold--even for me-- and I do not use that word lightly. I tend to whine about being hot or at least warm fairly often, because I am a wimp when it comes to heat. But cold is fine. Having lived in interior Alaska for 9 years and being used to going about my daily life in temperatures of -20 to -40 (F) for weeks and months at a time, it is hard to get worked up in temps of +20 or +30. But as people always say, that was a dry cold and I have learned that it does make a difference. It's quite damp here, of course, and yesterday we had the wind added in. The wind was sharp and I felt cold. It was nice to be standing there, feeling like it was winter, listening to the sound of the waves and watching the water change shapes and crash into the shore. 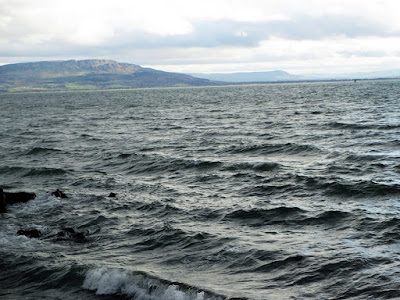 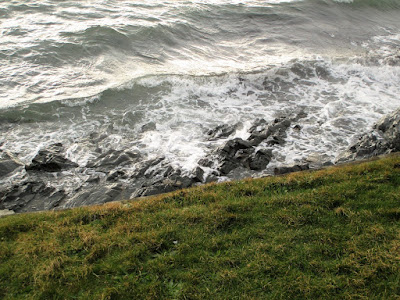 After we got home, I made a very large cup of tea, had a couple of Hobnobs, and read for a while. So cosy!

It seemed like a good day for a nice, hearty, warming supper and as luck would have it, I'd cooked a chicken overnight in the slow cooker. We'd called in at the shop at just the right time the day before to find chickens for half price, so we bought two. In another bit of good timing, Bill had defrosted the wee freezer compartment the day before that, so, with a bit of rearranging, I was just able to fit the other chicken in there.

I cooked some onion, carrot, and cauliflower, made some gravy with the liquid from the bottom of the crock after the chicken was cooked, added some chopped up chicken, and we had that over brown rice. 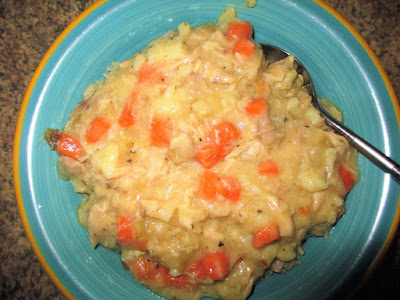 I have enough leftovers to reheat for supper tonight and half of the cooked chicken left, which I will use in tomorrow's supper.

Here's hoping you are having a cosy and delicious weekend too!
Share
Posted by Shari Burke at 5.2.17

I remember the wind in Ireland! I visited the Giant's Causeway in early April a couple of years ago, and a high wind was blowing. There was a bite in it that reminded you that it had only recently been crossing the glaciers in Scandinavia and hadn't wasted a second getting to Ireland.

I can imagine! Sometimes it is really something, sitting cosily inside and listening to it howl.