Not How I Thought I'd Be Spending My Time

I had some ideas for things I wanted to do after the holidays. You know what they say though--life is what happens when you're busy making other plans. I have gotten to the point where I am a bit frustrated, because not only have I not been doing what I thought I would, but I have not been doing much of anything.

Back in November, we had a lovely cold (for here) spell. Then it got very warm for the time of year--into the 60s. My allergies blossomed, with the headache, drippy head, pressure, brain fog, and sometimes coughing that comes along with it. I started to slow down. I stopped sleeping as well as I usually do in winter. I slowed down some more. It was the festive season, and I usually make it a point to spend that time quietly anyway, so I figured that would help me get back to normal faster. Then I started getting shooting pains in my face around my right eye. Then it went numb/tingly and my eye was watering all the time with the shooting pain happening occasionally as a bonus. Some of my teeth felt weird--like novocaine wearing off.  I was sleeping even less. I started having days where I could not really do very much of anything. Some days the pressure would ease and I would hope that the face thing would go and I would get back to normal, but then it would just come back.

This week has been the worst as far as sleeping goes. I got one hour of sleep one night and 3 another night. I feel exhausted, go to bed, and am awake for hours. Even when I do fall asleep, I am up every hour or hour and a half. Now the right side of my face is drooping. I could feel my lip was funny the other day while I was talking to Bill and he asked me what was wrong with it because it was drooping. I looked at myself in the mirror and smiled and sure enough it was a funny, half-droopy smile. My smile has always been slightly crooked, but now it is really crooked! It goes up on the left side and that side of my nose crinkles, but not the right side. Turns out it's a case of Bell's palsy, which I had never heard of, but hey, live and learn, right? It goes away by itself in a month or two and I am at around 5 or 6 weeks now. I am starting to be able to feel more of my face, with the numbness pretty much confined to the bridge of my nose on the right side. My teeth are just about back to feeling normal. My eye is not watering as much. The sinus pressure and congestion has eased up and I only cough once in a while. I am not sure whether the droop is temporary or not--I can try to use the muscles, apparently, in an effort to get things back to normal, so I am occasionally scrunching up the right side of my face--LOL

What I was really happy about was the fact that last night I could knit a little. Yay! I had not been able to knit or to read much and this week I didn't at all. I am hoping that soon I will be able to do some of the things I'd planned. In the meantime, I am trying to take today to rest as much as I can. We are off to Sligo tomorrow for Bill's cataract surgery on Tuesday morning and I would prefer to be functional, even with my droopy face.

As part of my attempt to have a peaceful, calm, pleasant day, I added some water and orange peel to the oil burner Bill got me for my birthday last month. It was made at Moville Pottery. 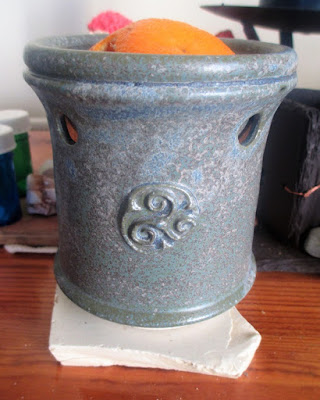 It came with this stuff that looks like coloured salt or something. The smell is not one that causes me discomfort, like most chemical things do, but it just smells like soap to me, so I do my own thing instead. Sometimes I do the orange peel, sometimes I add cinnamon, ginger, and cloves to the water, sometimes I add a strong-smelling tea bag, sometimes a sprig of rosemary, and sometimes I put in a drop or two of almond extract. Today it's orange-quite nice!

In the bedroom, I have a jar of winter pot pourri a friend sent. 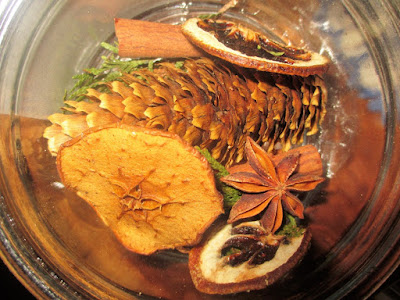 It is wonderful! It's not overpowering, but just gives off a lovely subtle scent. I am enjoying it as I type.

I've just had a nice cup of tea and am about to do some knitting. I attempted a nap and while I did not quite get to sleep, I was able to spend some time in that place sort of in between sleeping and wakefulness, so that was a sort of rest. I still have to toss some stuff in my backpack and I have no idea what books and yarny things I will bring. Usually I think way too much about those things, but I did not have the energy this time, so I will decide on the fly!  Send good thoughts for a decent night of sleep, please!