Last night I wove in the ends on my ruffly border, thus finishing my mitred squares blanket. 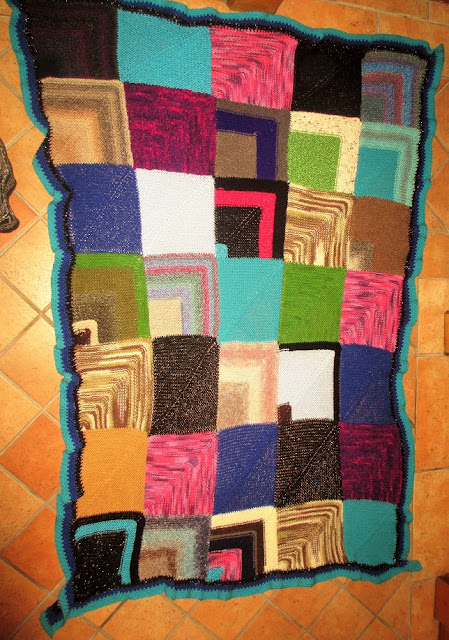 The 35 squares are knitted. The border is crocheted. Obviously, I could have used fewer stitches on the border, but when it started to ruffle, I thought about whether I wanted to rip it back and start the border again or keep going and have a ruffly edge. As you can see, I decided on the latter. Since this is for me I didn't worry about it and I like the way it contrasts with the straight lines of the squares. It is also nice because some of the squares are stretchy and this border, because it is not too tight, allows for a nice drape. If it had been for someone else, I would have ripped it back, unless they expressed a wish for the ruffle.😊 I also would have done it over if I had needed a wider border, since with fewer stitches in each round, I would have been able to do more rounds with the yarn I had. The length and width were fine though.

The yarn I used was all scraps and odd balls, given to me by a few friends and Bill. The exception was the dark blue and the turquoise, which I got at a local charity shop and had left from a pair of slippers I made as a Christmas gift. There were different weights of yarn, but I didn't worry about that. If a yarn was too thin, I held it double, but otherwise I just knit away on size 6 mm needles. I used the Russian join method, except for the boucle yarns, where it would not really work. This allowed me to just knit along, not caring about the colour changes.

I started during the first week of November. It was a good mindless project to work on and I could pick it up and put it down without worrying about where I was--a very relaxing project and a good way to use up scrappy bits!