Spent a little time in the kitchen today and now our meals are sorted for the next few days.

This morning after my coffee, apple, and breakfast sandwich of leftover pesto and cheese on toast, I decided to toast some oats. I mixed the toasted jumbo oats with coconut and almonds. Bananas are on sale at a local shop, so we have many of them. Breakfast tomorrow (for me) will be a bowl of the oat mixture with a banana sliced in, some walnuts sprinkled on top and a splash of milk. Bill always has his porridge cooked with milk and a chopped pear or apple and some walnuts.

For lunch I made a vegetable soup, using some of the bouillon I got the other day. As always, I made extra so we would have leftovers available.

Supper tonight was a kind of improv 'Mexican' lasagne, using stuff I had around. 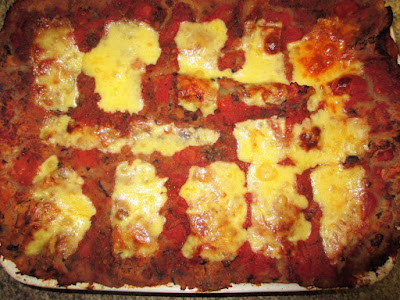 Years ago I used to make a dish that was layers of refried beans, salsa, cheese, and corn tortillas. No corn tortillas here, so I used lasagne sheets left from the Christmas Eve lasagne.

Yesterday I soaked some dried kidney and cannelini beans. At 11 when off peak electricity started, I covered these soaked beans with boiling water in the crock of my slow cooker, set it to high and continued with my night. By the time I got back to them at 9:30 this morning, they were perfectly cooked--I cook them on the high setting here because this slow cooker does not seem to get as hot as those I used to have.

I drained them, mashed them with a potato masher, put them in containers and stuck them in the fridge. When I was ready to make supper, I sliced a large yellow onion and chopped two bell peppers. These I cooked in a puddle of olive oil until the onion was translucent. Then I added some granulated garlic, oregano, and some chili powder to the pan and mixed it in, letting everything cook for a few minutes more.

I layered canned chopped tomatoes in juice, the lasagne sheets, the beans, the spiced veggies, and cheddar cheese. On one layer I added some sliced red jalapenos from a jar. I also ran a little water around each can and poured that around the edges of the pan. I always make my lasagne with uncooked regular (not the no boil) noodles and it is good to make sure there is enough liquid for the noodles to absorb. In this case, I knew the beans would also absorb some more liquid, so I wanted to be sure there was enough in there. By the time it was done cooking, all the liquid was absorbed.

Over the last layer of lasagne sheets, I spread more beans and more tomatoes. I covered with foil and baked at 200C for almost forever (my ovens here have all been tiny and they take a long time for something like this--I do not cook large things in it very often!). After 45 or 50 minutes, I took it out and checked it by sticking a knife in at various places. Needed a bit more time, so I left the foil off, put the pan back in for another 15 minutes and checked again. Almost done, so I added the top layer of cheese and put it back until the cheese was melted and bubbly. That was it--nice and hot, noodles cooked, and we both love it. Just as well, since we have plenty of leftovers. This is something I will make again in future, but like almost everything I make, it is likely to be a little bit different every time, depending on what I have around the place. Might be different beans, different cheese, the addition of corn and/or courgettes (zucchini), salsa, or some other thing.

I am always well pleased when I have my own ready meals in the fridge! Hope your fridge is stocked with stuff you love too 😋
Share
Posted by Shari Burke at 7.1.17