Meandering Through the Weekend

It has been my kind of weather this weekend--clouds and rain mostly, even though I woke up to bright sunshine streaming through the bedroom windows this morning. The rain has often come bucketing down and I realized how much I had missed hearing it clatter against the windows. For some reason it rarely did that in Killybegs. Even on Friday afternoon as I rode out a migraine in bed, the sound of the rain was soothing and distracted me a little from what felt like a guy inside my face, stabbing me with an ice pick! 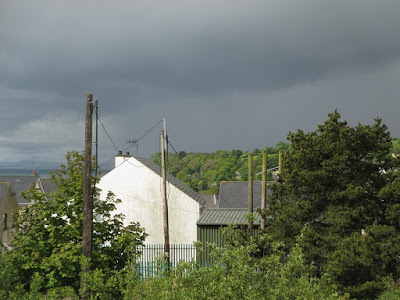 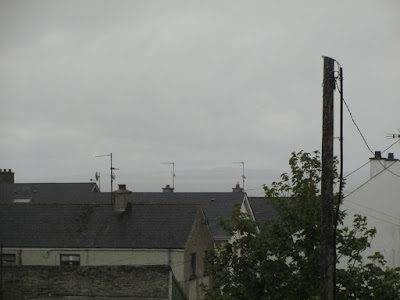 Thankfully I was feeling better by Friday night and got a good night of sleep, awakening on Saturday to the rain against the windows. We made a quick dash to the store for some eggs and milk in between showers, came home and settled in for a lazy weekend.

I made a hat yesterday out of a ball of mostly cotton yarn I had gotten last summer at the charity shop in Killybegs. I had gotten two balls of white and one grey. I used the grey and one white to make an infinity scarf using a Tunisian crochet elongated knit stitch. I made the hat using the same lacy stitch. 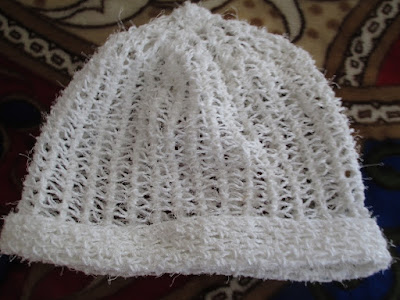 The ball of yarn was only 110 metres and I used it all. I made the man part of the hat in a strip, turned it sideways, sewed the first and last rows together to form a tube, then used regular crochet to make the crown. I just did 2dc tog around until there were a few stitches left and cinched it closed. Then I worked an alternating sc, ch, sc brim, working around and around doing sc in the ch spaces and ch1 over the sc stitches. I just went until I was almost out of yarn and then wove in the ends.

Another lazy day today as I sat around and read a couple of books.

Small, simple pleasures--rain spattering against the windows, cups of tea, yarn, and books. Happy days, as they say here. I hope you are having some happy days in your neck of the woods!