Hats and a Collar

I have spent a week or two working on my latest commission--three hats and a collar/cowl. 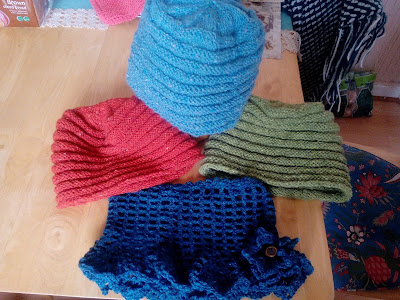 The hat design was one I had made up for myself last year. I happened to be wearing my hat one day when the woman who ordered these came by and saw it. She kept saying she liked it and that it was different. Then she said she wouldn't mind a few for her shop. I said OK and a couple of weeks later she showed up with the wool for the three hats, a collar and the wool for me to use to copy it. All finished and waiting to be picked up.

Once I finished these I picked up the second sock in a pair that I started just before Christmas and I finished that off this afternoon. I think I am in the mood to cast on another pair of socks, but I have to think a bit about how I want to make the cuffs. I could do some plain 2x2 ribbing as I usually do or I could try something different. Not sure yet.

It has been kind of winterish here after a very mild November and December. January was a bit of a mix, but February has been crisp, often frosty, and chilly. Oddly enough, Feb 1st is referred to as the first day of spring here. We had more springlike weather over the winter! Strange weather year all around. It was summerlike for the first couple of weeks of April, then it got nice and cool and summer was mostly in the 50s with lots of rain--best summer ever in my book. Then more summer in October. Who knows when things will warm up. Not that I am complaining! Maybe I will make that next pair of socks with some sock yarn and mohair!
Share
Posted by Shari Burke at 25.2.16