Bill and I rode along with a friend to Donegal Town this morning. He had to go there to pick someone up and we thought it would work out well, on this fairly dry day, for us to be dropped off there with enough time to take a walk along the path by the bay before going to Aldi and calling in at the health food store to get some peanut butter with no stuff added. We can usually get this locally, but it's cheaper there. Not only did we get our peanut butter, but I grabbed a box of ginger orange tea with vanilla to try--it is quite good!--and I found a big bag of dried parsley. Much better than always buying those small jars, even though they are only 35 cents at Aldi and at Lidl. That was our last stop, though. Before that we wandered around town a little and found ourselves across from Donegal Castle. 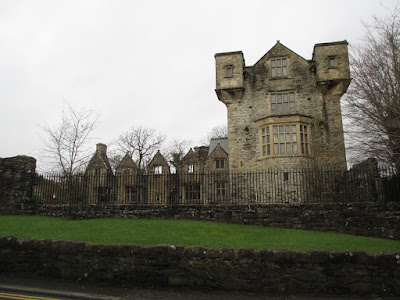 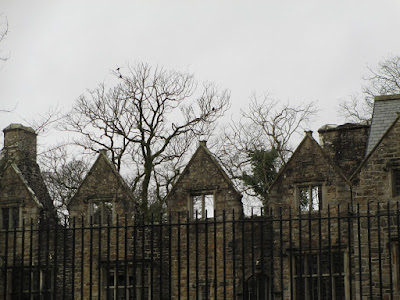 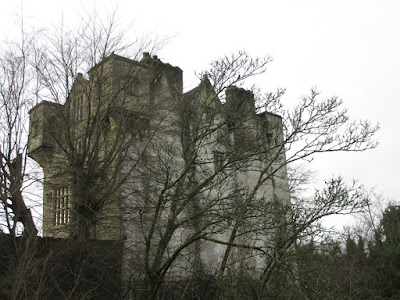 We stopped on a bridge over the river and watched some birds--this guy stayed in his sheltered spot the whole time we were there. 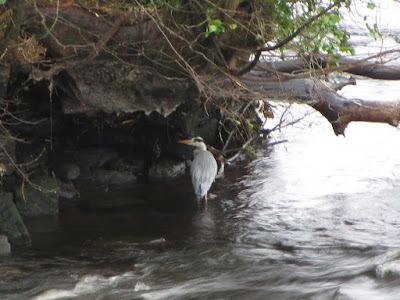 Then we went back up towards town and the Bank Walk. I stopped again on a different bridge over the same river because I was taken with this big, mossy tree. The green was much brighter in person. 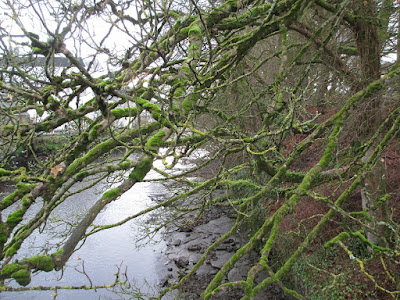 When we got to the beginning of the path, we found out that we would be changing our plans. 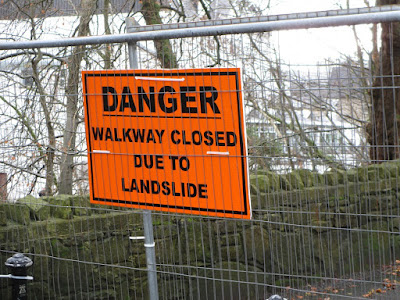 So instead of heading down the path, we stopped and admired the same tree from the other side. 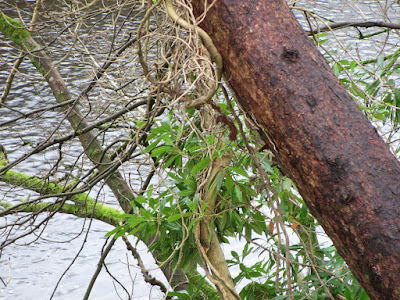 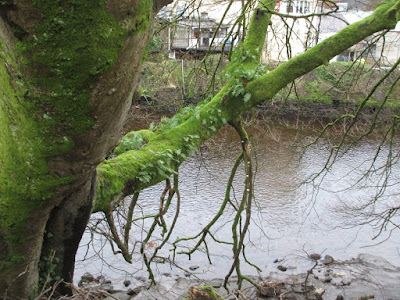 The cream-coloured branches across the river were striking. 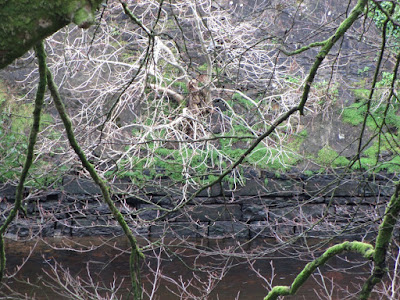 We meandered back to The Diamond in the centre of town and sat there to eat the cheese and muffins we'd brought for lunch. Then we went to Aldi. I quite appreciate these instructions on the edge of each crosswalk here at the roundabout. I am getting better at it, but with cars moving in opposite directions from what I am used to, I always have to hesitate when crossing the street and think which way to look first. 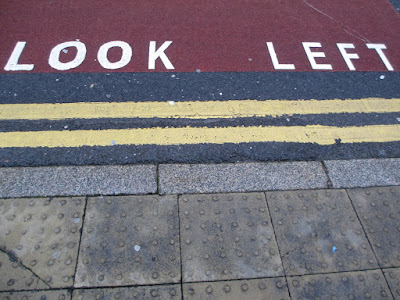 We got our stuff in Aldi and got it packed up in our backpacks, with one carrier bag besides, made our stop in Simple Simon's, and headed back for The Diamond to wait there for a few minutes until it was time to catch the bus home. As we left, Bill nudged me and said, "There's your song." I had made it through weeks of Christmas music and successfully avoided hearing the songs I loathe, including the horrible, detestable, and obnoxious, "Santa Baby." My luck ran out this afternoon as the tail end of it was playing as we walked outside. A song or two later, it was my turn to nudge Bill and say, "And here's one for you!" It was Michael Buble and Bill is not a fan! Not long after that we had walked over to the bus stop when Mr Buble's invitation to have a holly, jolly Christmas began coming at us from the opposite direction. Bill growled that he really hated Buble's guts. Most unfestive!

It was a pleasant day. Donegal Town is a nice place. But I am always happy to get home. Now to avoid "Last Christmas" for another week and a half!
Share
Posted by Shari Burke at 16.12.15

I too detest Santa Baby and to that I add, "All I want for Christmas" by Mariah Carey, "Last Christmas" by George Michael, that awful Beatles Christmas song (or is it Paul McCartney?), "I saw Mommy Kissing Santa Claus" (what is up with that?!) and the Beach Boys.
Actually I detest all Christmas music. It is so overdone, every where. It should all be retired for a decade and then we can see if we need more time. (Actually, considering how sick I still am of 80s music, I may need several decades.)
And that is my gripe of the day!
Lovely pictures, btw!
cheers
dana

Oh yes, those are awful! My top (bottom?) three most hated are Last Christmas, Baby, It's Cold Outside, and Santa Baby, but I find myself rather tired of a lot of it. I tried to listen to an instrumental collection on you tube and it began with an instrumental version of Last Christmas!! This year I have listened mostly to instrumental stuff and traditional carols sung by choirs. I am a great fan of A Christmas Carol and have several audio versions of that. A friend just sent me a DVD with silent movie versions of the stories from the 1920s! Looking forward to that!

Those sound good. I picked up a copy of Dicken's Christmas Stories from the library just this weekend. I enjoy medieval or "Old English" carols but don't go out of my way to listen to any of it. For me, the holiday is religious so I tune out the secular/commercial aspects as much as possible!

I read a story today about some DJ in Austria who locked himself in and played Last Christmas over and over! He stopped after the 24th time when his 4-yr-old daughter called in and asked him to stop.

Have a lovely Christmas week!