Today is referendum day! Ireland votes today on whether or not to amend the constitution with regard to marriage and the age of presidential candidates. We (and every other household) got this through our mail slot a few weeks ago: 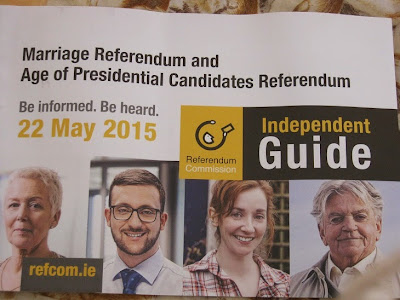 It is in Irish and English and is quite well done. 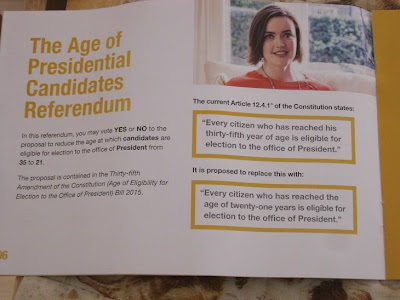 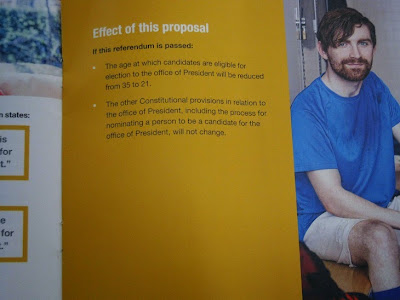 I like how they tell you what the current situation is and what the situation will be if the measure passes. It reminds me of the excellent material we used to get from Oregon a couple of weeks before we would get our ballot. Oregon is a vote-by-mail state, so everything would come right to the mail slot. 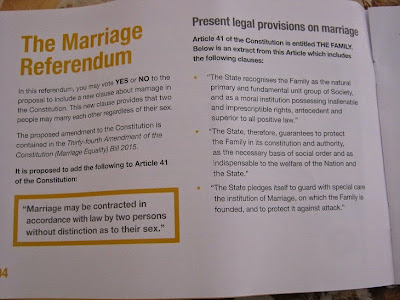 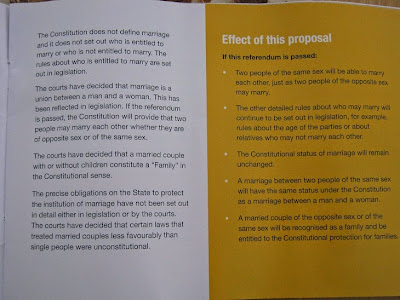 Of course the marriage equality measure is getting far more coverage than the age of presidential candidates and people seem to be really engaged with the issue. The anti-equality folks, having no logical arguments to fall back on, have plastered many towns with posters about things like surrogacy. When I first saw these I thought I'd missed something and I asked Bill if they were voting on surrogacy issues as well! Then I realized that they were so lacking in valid reasons to oppose equal rights that they were trying to muddy the waters--LOL. For the record, surrogacy is unregulated here and is a matter for the legislators to decide, according to the courts. And of course you get the same old tired arguments about how the religious views of some should be forced upon everyone and the totally ignorant and unfactual claim that marriage has "always" been this way. Marriage has NEVER been any one way. It has been different across time and across cultures and any cursory glance at the real world shows us this. However, coming from the US where interactions with the real world are few and far between for a large segment of the population, this is not new to me.

Irish citizens who live abroad apparently are not eligible to vote from where they are, so there has been a campaign to get them to come home and cast their vote. It appears that many people are doing this!

We were going out the other day and the young man who lives next door came out to chat. He said, "Big vote in a couple of days. For equality." I was delighted to hear that and to hear that he'd been talking with his mates about it. I told him how I had felt a few years ago when I got to vote in favor of civil rights (which in my opinion should not have to be voted on) in Maine, if only at the state level. We parted in agreement that we all had our fingers crossed for the yes side to prevail, but we won't know until tomorrow.
Share
Posted by Shari Burke at 22.5.15