On the first Tuesday of every month, there's a book club discussion at the library. The books are chosen from titles that have enough copies in the system so that Mary, the librarian, can gather them and hand them out. We didn't go to the discussion last month because I was having sinus issues, so we didn't get a copy of the book under discussion this time. When we went to the library the following week, Mary said she'd get us a copy when someone returned it and I asked what the book was. Turns out it was We are All Completely Beside Ourselves by Karen Joy Fowler. 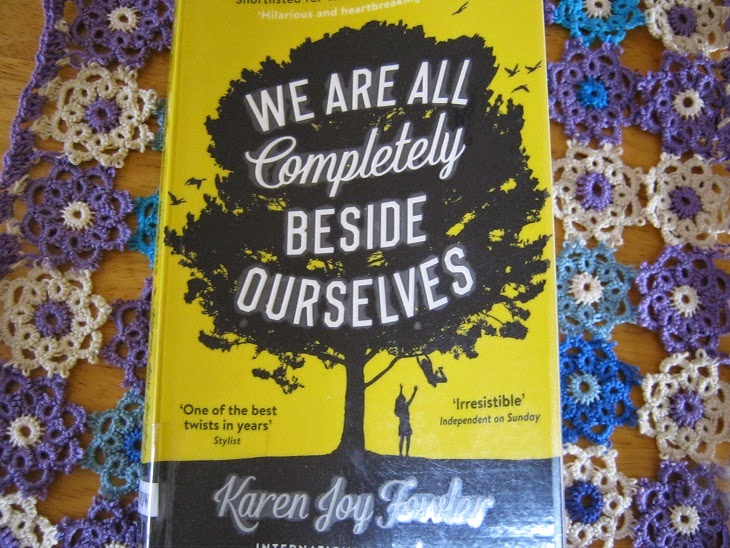 When I heard this, my heart sank. I'd heard a lot about this book when it first came out and requested it from the library in Maine. I was looking forward to reading it until I read that if one is squeamish about animal testing, one should think twice about reading it. I returned it unread. When I learned that it was the chosen book, I just hoped that we would not get a copy in time.

On Saturday we got a text from Mary saying that the book was there, so we called in and picked it up. She said a few other people had not liked it and one woman read a bit and returned it, saying she didn't want it. Mary herself had not been able to read it because there were no available copies, and she said she was curious to see what I thought. I decided that I would start it and if I reached a point where it was too traumatic to read, I would either skip the gruesome sections or stop reading. We came home and I started reading.

I stopped reading for supper and then finished the book after we ate. I loved it! It dealt with some difficult issues in an interesting way. I did reach a point where there was a description of lab animals and the things done to them, but I could see what was coming and I skipped those couple of pages.

The book is narrated by a young woman who "begins in the middle" of her story and that of her family. It's a dysfunctional family and there have been some disruptions--Rosemary, the narrator, is the only child of 3 left at home. Her sister and brother have disappeared in different ways. So have the grad students who used to be around all the time working in the scientist father's lab. Her sister, Fern, is a chimpanzee who was adopted at the same time Rosemary was born. Their lives were an experiment so that their development could be monitored and compared. They also wanted to see whether Fern could learn language. When they were 5 and Lowell, the brother was somewhat older, Rosemary was sent to her grandparents' home and when she returned, Fern was gone and the remaining family was living in another house. There was no explanation for this, except she was told that Fern was living on a farm. A few years later, Lowell disappeared, too. These disruptions define Rosemary's life--and the lives of everyone else-- from then on.

When we went to the discussion last night, we discovered that everyone else hated the book, but they felt compelled to read it to the end anyway--several people used the word "compelled" more than once. I thought that was interesting. Bill liked the book somewhat, but was unenthusiastic. I was the only one who really loved it. When I was asked why I loved it, I said that it was because it was a book that dealt with difficult issues in a human way. Having an interest in human evolution and symbolic thought (which is what language is) I found the story interesting. I thought the book could be uncomfortable for people because it illustrated things we often don't think about. I pointed out that I am not supportive of animal testing, though I took the narrator's point when she listed a few advances in medicine that have resulted from such tests. As she said, "No one said this was easy." I also said that it is, to some degree, a matter of where we draw the line. Keeping animals in a cage and doing terrible things to them is bad, but eating a chicken that was stuffed into a cage with too many other chickens after having its beak cut off isn't something we think about. It's torture all the same. Buddhists talk about respecting all sentient beings and I agree with that, but I still swat mosquitoes.

I was also drawn in because of the ways in which the book showed how blurred the line is between the ape species. We tend to anthropomorphize animals--especially chimps and other apes--because they remind us of cute and quirky versions of ourselves. But that isn't what they are. We are domesticated animals; they aren't. Our evolutionary line split a long time ago and they are not us. Neither are they completely different. There is some similarity. The book was a reminder that we are animals, too, and we are not as unique as we think we are. It was also a good illustration of the ways in which we have lost our understanding of our place in this world as we try to dominate everything. We forget that we are all interconnected and as we destroy the planet and the species that inhabit it, we are also destroying ourselves.

There is nothing I love more than a book that sends me off into thought about various big issues, but I have a feeling, based on the comments this time and at other times, that this isn't what most of the people there are looking for in a novel. They also did not like the way the book was narrated. They didn't like the way it started in the middle for one thing, and I think they weren't keen on the conversational tone, but I liked that.

If you're looking for a fluffy read to pass a few hours, this isn't the book you should choose. If you enjoy reading books that bring up difficult and challenging ethical and philosophical issues, presented in a very readable and compelling (everyone agreed it was compelling!) way, then this is a good one to pick up!