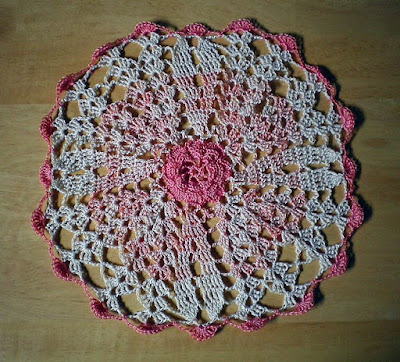 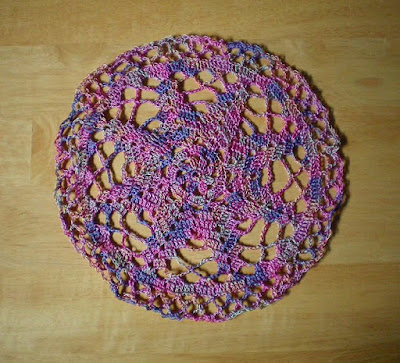 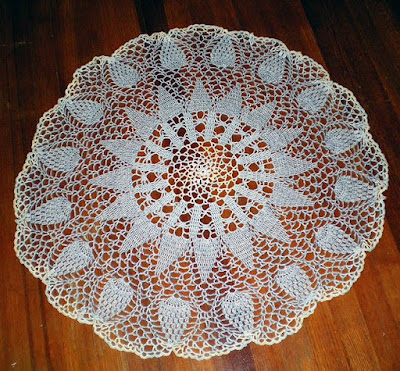 For the past several months, I have been obsessed with crocheting lace. And playing with color at the same time. It started when a friend asked me before we left Klamath Falls if I would be able to make her a very large rectangular lace shawl out of crochet thread. She knew it would take a long time and was quite willing to wait months for it. I said I would love to do such a project and so off we went to get the supplies. She wanted a neutral color, so I suggested ecru, but also I thought that some sewing thread carried along would add interest and depth. She agreed and so I crocheted across the country all summer. Mostly I worked on the shawl, but I also made some lace socks. By the time we arrived here, I needed to look at something else for a while, so I got out my bag of odd balls of sock yarn and made a lace scarf with lots of fringe and many colors. Then Bill said he liked it and wanted one, so I did another one. I made Christmas ornaments and bookmarks out of thread, putting various weights of different colors together to see what happened with the colors. I did a lot of dreaming--”what would happen if I...?” And then I went to the library and found an old copy of a crochet magazine full of lace projects for thirty cents. It came home with me. And as I flipped through it, I started thinking about all of my friends in Klamath Falls who have a hard time with winter. They are the complete opposites of me—where I feel energized and alive in winter, they live for summer. Where I get depressed in spring and summer, they feel alive. I was looking at all the lace done in floral themes and I decided to send them bits of spring done up in thread. I enjoyed myself immensely. And the more I crocheted, the more ideas I got. The obsession has not quite run its course yet. The ideas are still coming and I still find myself eager to try them out.
I find lace fascinating. It can be beautiful, no question about that. And it is highly versatile in terms of how it can be created—by hand or machine, with a crochet hook, tatting needles or shuttles, knitting needles, bobbins, and countless other ways. The very fact that there are so many ways to create it shows you how important it has been throughout history. That's kind of weird, because it's only purpose is decorative. There is no useful reason for lace. It is there to be pretty and be looked at, and therein lies its importance, of course. It's a class thing. Always has been. The wealthy had lots of it and even men had clothing decorated with ruffles and cuffs of lace. That made it desirable for all people, so cheaper ways to produce it were developed. And of course, countless people survived famine and poverty in various parts of the world by making the lace that would adorn the clothing of the wealthy. Machine made laces put a damper on this at some point, but even today in places like India and China, women and children labor for very small wages to create lace. There is no machine that can produce crocheted fabric, so when you see crocheted doilies in the dollar store you know that somewhere someone spent a good amount of time creating that. That dollar that you pay at the store had to pay not only for their wages—as tiny as that amount is—but also for the materials and the cost to ship the item.
And there is a gender issue. Today lace is seen as feminine, even though upper class men used to wear a great deal of it to show they were upper class. But today it is considered a woman's item. And it has been women who have labored for low wages to produce it. Once the machines took over, that changed, but when the lace is handmade for money, it is usually women who do the work and get paid a pittance. Today I have the luxury of using the creation of lace as a way to express my creativity. I can play with color and design and put things together in new ways. I can use lace in ways that go beyond decoration by making lace socks, shawls, and other useful items. I suppose I do so as a way of making a statement, though. Yes, it is beautiful to look at. But there is a whole history here—a history of women and of poor people—a history that does not usually get told. But it's all there within the lace.
Share
Posted by Shari Burke at 15.12.09

Like you, I have a love for lace! I happen to tat lace by hand! I also collect tatting shuttles and have some beauties!
Did you know that back in the 1400's - 1500's that lace was used as a form of currency! Certain types of laces (from different areas) were worth more like certain bills are today! Isn't that interesting...so it's "usefulness" was more than just decor at one time. I read this in a book about the history of lace throughout the ages. I wish I could remember the name of the book right now, but I can't! :)
Enjoy your crocheting! I'm sure your lace is beautiful. I am rather partial to tatted lace, but there are so many beautiful thread crochet patterns out there that are so ornate and decorative, too!