We made a quick jaunt to Donegal Town yesterday to drop off stuff at the library. As we usually do when we take the midday bus, we went to Aldi for a few things first, since the library is just about to close for lunch when we arrive in town. I've been amused at the way pancakes are sold here as a mass-produced, overly packaged item. There are different forms of pancake, but this is a new one on me:
I wonder how people eat these. Larger pancakes are often spread with Nutella or sprinkled with lemon juice and sugar. I suppose people could do the same with the tiny ones. We rarely eat pancakes and when we do, I make them myself, so haven't tried any of the pre-made ones.

When the library re-opens at 1:30, we try to be in and out, because the bus we prefer to take home leaves at 1:45 and it takes a few minutes to walk back to the stop. A couple of weeks ago, we were waiting, along with several others, and Colin (the librarian), wasn't appearing. On that day, I only had one book to drop off and several to pick up, so I wasn't concerned about leaving. Before we left, a woman asked if I wanted to leave my book with her and she'd drop in off for me. I did and she did. When we went back the following week, Colin apologised for being late. I told him it was no big deal and since I'd had more books come in since, it was just as easy to pick them all up together. Yesterday, he came rushing in and said, 'I had a feeling you might be here!' He handed Bill the items he had in and I dumped all the returns on his desk. He explained that he'd only just gotten off on his lunch break because it was so busy in the morning. He was dashing off again to get something to eat, but he knew we were in a hurry to catch the bus, so he came back so we could return and pick up stuff. I thought that was nice of him and I was happy not to have to lug home the bag full of books. It seems like a book drop would be a good thing. There was one in the Ballinrobe library, but I haven't seen one since. I don't recall seeing one even at the Central Library in Letterkenny.

Errands done, we caught the bus for home. I love the hydrangeas growing by the bus stop here. 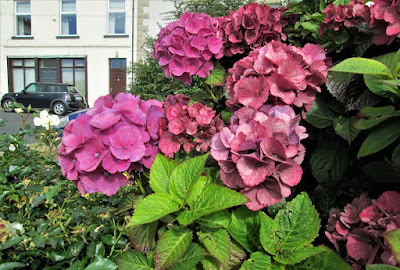 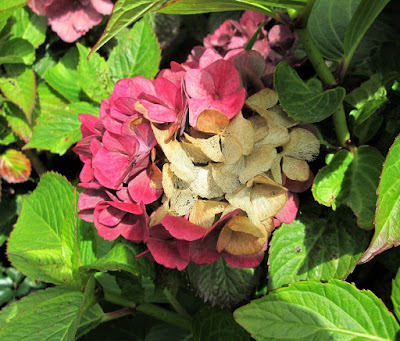 I hope it's a pleasant day in your neck of the woods!
Share
Posted by Shari Burke at 18.9.19

Love your librarian!!
I have great ones also!!! My granddaughter works summers and holidays there and another one volunteers weekly!

It was nice of Colin to do that! I've never been to a library that didn't have walk up and drive up book returns. Good thing too since for years I lived way out in the country and always returned books when I went to town. Those flowers are beautiful!

Forgot to say that I've never seen any mini pancakes at the store. I've heard of people eating Nutella on pancakes, but sprinkled with lemon juice and sugar? That's a new one on me@

Brenda--Bill, myself, and our daughter have all worked at libraries at one time or another, both as volunteers and as employees--love libraries!

Vicki--I'd never heard of the lemon juice thing, either. If I was going to have pancakes, that wouldn't be my choice of topping. I don't have pancakes much, but when we went glamping a few months ago, there was a cafe on site that is known for their pancakes, so we tried them, topped with ice cream. Yum! They were excellent pancakes :-) I wish there was a book drop--the library is only open on Tues and Thurs from 9:30-5 or half five and closed from 12:30ish-1:30ish. Plus, only one librarian and sometimes there's no sub and the place is closed. I stopped once to drop off books when we were on our way out of town, but they were closed and I had to bring the books to Belfast with me.

I hope the weather is cooler for both of you!