The other day when we were in Donegal Town, we had time to kill before the library re-opened after lunch, so we went into the Animals in Need charity shop. I often find great necklaces there to deconstruct for parts and this was no exception. I found one that was a string of large turquoise beads and one that consisted of a chain with 5 black metal flowers joined together. As I was taking them apart, I glanced at the table with the 5 flowers sitting there and thought of Halloween. After I put away the various beads, chains, and clasps that remained from necklace deconstruction, I went to my embroidery floss and kumihimo disk, choosing orange and black thread and setting up the disk. I spent a very enjoyable evening braiding with the Halloween colours and listening to podcasts as I thought about whether I wanted to add anything else at the end. I decided to keep it simple and just attach one of the metal flowers to the braid, which I made long enough to slip over the head without a clasp. I was working on other things for a couple of days, but I finished the braid this morning and sewed the flower on.   I love the simplicity of it. 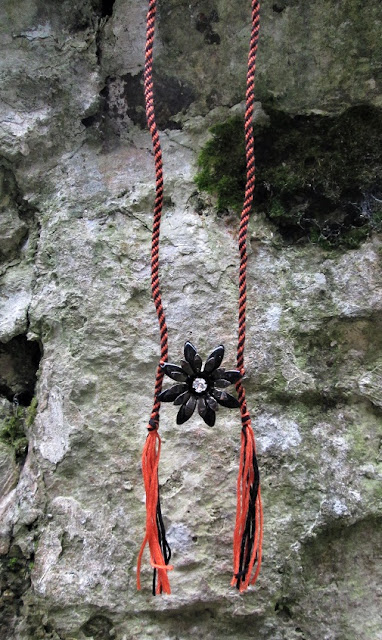 The weekend before Halloween is a holiday weekend here and the time when we move the clocks back. There was some discussion of scrapping the time changes in the EU, but that might not happen here due to Brexit. People wouldn't want to be in a different time zone than Northern Ireland. I love winter time and hope it stays, but I suspect that, for many people here, there will be bigger things to worry about than the clocks as Brexit occurs on 31 October!
Share
Posted by Shari Burke at 24.8.19

It's beautiful Shari, I love it!