I finished this hat last week and have been wearing it out in the blustery weather. It's nice and cushy, although not quite as bright as it appears in the photo. 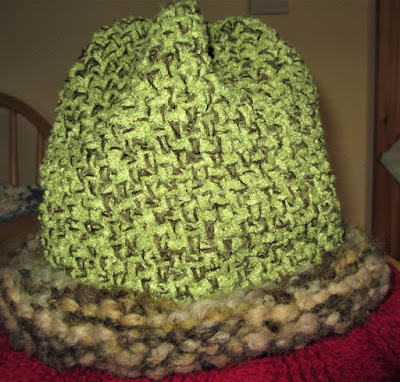 The main part of the hat is crocheted with two strands of chenille in different shades of green using a 6.5mm hook. The lighter green was a scrap ball in a bag of scrap balls that a friend brought back from Goodwill in Boston a couple of years ago. A few months later, she found a giant cone of the dark green chenille there and brought that back for me. I made a poncho and still have lots left on the cone. 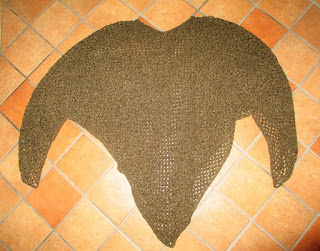 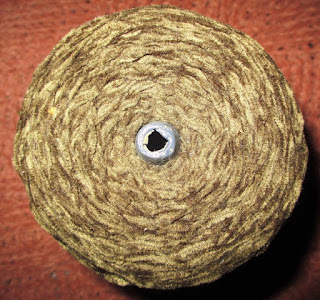 The hat brim was made from a ball of fuzzy yarn that was in a big bag full of yarn given to me by another friend. From the moment I saw it, I was thinking 'hat brim' but it took a while to decide how to make the hat and which yarn to use with it. It might not show well in the photo, but as I was looking at the ball of yarn, I saw some faint tints of green in the lighter brown areas and I thought of the chenille.

Once I made the hat, I used 9mm 16 inch circular needles to evenly pick up stitches in the fuzzy yarn. Then I just knit around and around until the brim was as tall as I wanted it. I still have some of the brown yarn and the lighter green chenille. And there's plenty of the dark green chenille left on the cone, so when inspiration strikes again, it'll be waiting!