We did a quick bus ride to Carndonagh this morning. There's a SuperValu there, which is a larger store than the two small shops in Moville. We go there once in a while to stock up on things that are not readily available here in town, like brown rice, dried beans, and other foodstuffs. If we get the 9:35 bus, we get there at 10ish and can get our groceries and get the 10:45 bus back, so it's a quick turnaround.  Unfortunately this means that my morning coffee is delayed. Sad! You can bet that the very first thing I do upon re-entering the house is march through the living room, through the kitchen, and into the little utility room, where I press the button and wait eagerly for the gurgling sound of coffee brewing! I was delayed by an extra few minutes this morning, because we stopped at veg man's stall when we got back to town--we walked right by it anyway. The Christmas music was playing from the tree. He said that he had his own music for when the tree music got to be a little bit too much. He had cranberries again, so I got a few more bags. I am going to have to put on my gloves and do some arranging in the freezer, but that can wait until tomorrow.

SuperValu is part of a small plaza and has other businesses on either side of it. As we were walking there this morning, we both noticed these decorations in the window of the clothes shop.


After we had lunch, we decided we might as well go to the little shops here in town and get the stuff we wanted from those. They're saying that we could be in for a few days of wintry mix/sleet/snow, so best to be prepared just in case and we try to support local businesses as much as we can.

I was bummed to hear the song, Last Christmas, as we came out of one of the shops. I loathe that song and had avoided it up until today. Thanks, Centra! Fortunately, it came on just as we were finished packing the backpacks, so we walked away before it was over and I didn't have to listen to the entire song.

On the way back up the hill, we passed this window--someone musical must live here! 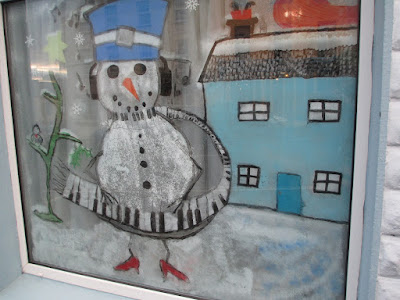 I love the red shoes with heels! Poor Santa looks like he's gonna have a hard landing at the bottom of that chimney!

We called in at Gillen's shop and picked up a few things and then came home. It's always so nice to get home! 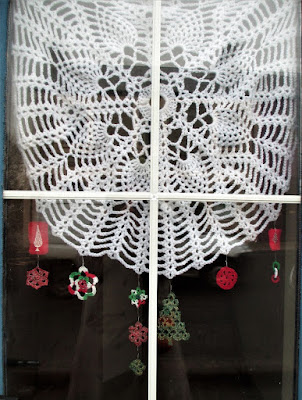 This is a lovely post. My husband has diabetes and 4 times per year, has to have blood work early morning and cannot have coffee. Like you, the first thing we do when we arrive back home, is brew coffee! I love the musical window art - very whimsical. I also like the wood snowman. The last picture is so very lovely/delicate.