A Stitch Here and a Stitch There Eventually Makes Socks

I've had socks on the needles in a pouch next to my spot on the couch for months. I'd pick them up when I felt like it and do a few stitches. Sometimes I did a needle or two, sometimes a few rounds, and sometimes I'd work on them for a little bit longer. I finished sock one, cast on sock two and continued to do some stitches here and there. I was not in a hurry and I like to always have a project like that available. The other day, I picked up the needles and did a few stitches. They turned into a few rounds. I kept going and when I put the project down, I had a good portion of a foot done. The next day I continued to the point where I'd start the toe decreases. Last night I made the toe, cut the yarn and got the ends woven it. 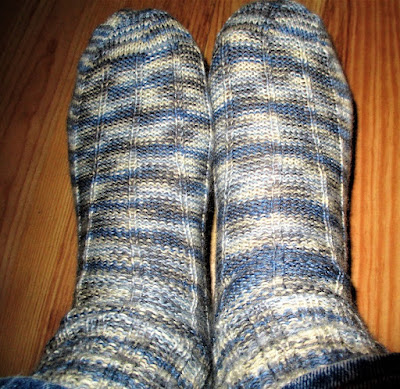 This morning I grabbed another skein of sock yarn and stuck it in my pouch. Bill commented the other day that he could use another pair of socks, so the next pair will be for him. It's not urgent, so I have no idea when they will be finished, but by doing a few stitches here and a few stitches there, eventually he'll have a new pair of socks.

For the socks pictured, I cast on 68 stitches with a size 1 needle and some sock yarn. I did a 2x2 cuff, changed to size 0 needles and did a regular heel flap over 34 stitches (sl1, k1 across on the right side and sl1 and purl the rest across on the wrong side until 34 rows were completed) and heel turn. When doing the gusset decreases, I stopped when I had 72 stitches on the needles and did the rest of the sock on the 72 stitches. For the top of the foot that is shown in the picture, I worked over 34 stitches--k3, p6, k1, p6, k1, p6, k1, p6, k4. I did a round toe, starting with a round of k10, k2tog and then decreasing on every other round (k9, k2tog, then k8, k2tog, and so on) until I had 6 stitches left. I threaded my yarn through those stitches, pulled the hole closed, and hid the ends. I will decide how I want to do the next socks as I am doing the cuff and heel on the first one. It's going to have to be simple because the yarn is busy and anything other than simple would get lost.

I don't use sock patterns, since I prefer to just make the socks in the way I know fits best and is most comfortable for us to wear. I vary the stitch combinations I use on the stitches that make up the top of the foot and leave the rest. Because I am usually making socks for Bill or myself using sock yarn and size 1 and 0 needles, I know the numbers now for the cast-on, heel flap, heel turn, etc. But I came across this handy chart a while back and I saved it. It looks like it could come in handy for a time when I might want to use different yarn and need different numbers. Perhaps it might be useful for some of you, too. 😀